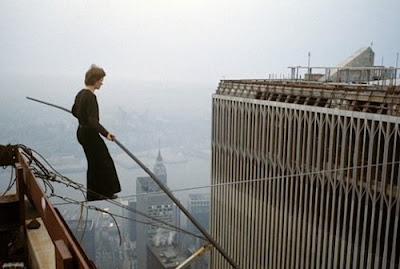 Apollo, God of the sun and of the morning and, er, mice, gave humanity one piece of advice at his sacred shrine at Delphi: "Know Yourself". 19 hours on a plane will teach you a lot about yourself, perhaps things that you don't want to know. My love of life is suprisingly tenuous and my fear of hijack and diversion to a random airport is not as high as one would expect. I flew from Melbourne to Dublin to do some book readings and since I have done this journey a couple of times before I at least was prepared. I downloaded two movie rentals onto my iPod nano and I brought along 3 books: Michael Chabon's The Adventures of Kavalier and Clay (excellent so far), Tony Judt's Reappraisals (ok so far) and thanks to the largesse of Seana Graham, James Ellroy's Blood's A Rover (which I'm saving for the return flight). The iPod films I watched were ones I had seen before as I didn't think I could take the risk on a new movie: Man on Wire and Waltz With Bashir (two favs from last year). On the plane I watched Mr. Brooks, which looked like a good idea but was clearly committee-ed to death by the producers. In order to appeal to America's alleged puritanical streak (just like in cheesy American horror films of the 70's) every person serial killer Kevin Costner kills sort of deserves it because they are sexually open or have a moral weakness; of course we don't get to see the grisliness of these murders or their consequences - it's a cowardly film and was rightly panned when it came out but the worst aspect is a frankly insane subplot with Demi Moore as a detective who early on survives being thrown from a van at 50MPH into another car's windscreen, without even messing up her hair. It's very nice hair, but still...
...
My neighbour on the flight was a Melburnian woman fluent in Sicilian going to spend the summer with her sister south of Siracusa. I haven't been to Sicily but anyone who's read Thucydides will never forget the disastrous Athenian invasion of Syracuse which destroyed the Athenian Empire and basically led to Athens becoming an occupied city for the next 2400 years. My neighbour told me that the ruins are spectacular and definitely worth visiting and some day I hope to do just that.
...
A final word about Man on Wire. Highly recommended if life's been getting you down lately. You'll say, as Woody Allen says at the end of Hollywood Ending, "thank God for the French."
Posted by adrian mckinty at 11:42 PM