The Best Show On TV 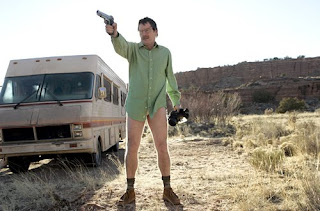 Remember a couple of years ago when I started watching this little TV show called Mad Men and I kept telling everyone that it was the best thing on the box? No? Well, that was in my pre blog days, but if you knew me back then or hung around the staff rooms that I was hanging around in, you probably heard me going on about the great underplayed writing and the sense of style and Christina Hendricks's formidable talents. Nobody believed me back then and Mad Men languished in the ratings on AMC, not really taking off until its DVD release.
...
I'm pretty late to the Breaking Bad party, a show which is also on AMC. I watched the pilot on iTunes yesterday and then episodes 2-7 last night. Its the story of a high school chemistry teacher in New Mexico who discovers that he has terminal lung cancer. His wife is pregnant, his son has cerebral palsy, he has no insurance or savings. So, in the state where Billy the Kid got his start, and in the finest traditions of the American dream, he decides to use his knowledge of chemistry to become a meth amphetamine manufacturer. He cooks some real fine blue belly, the other drug dealers get upset, and then, of course, the fun really begins.
...
One of the things I love above Breaking Bad is the fact that it's shot entirely on location. I lived in Colorado for 8 years so I got to know northern New Mexico really well. It's hard to explain but the quality of the light is different there from anywhere else I've ever been. In a movie or TV show I can immediately tell when southern California is pretending to be New Mexico: in NM the sky is a deeper blue, the desert a richer amarillo, and there's an intensity to the scenery even at a humble truck stop or gas station in the middle of nowhere. I also enjoy the fact that they set Breaking Bad in blue collar, unglamorous Albuquerque rather than trendy Sante Fe or Taos. I used to love to go to Albuquerque and eat van cooked tamales and sketch the enormous railroad yards or the craziness out at UNM where the mighty I-40 meets the I-25.
...
If you remember Bryan Cranston as the dentist on Seinfeld or the harassed dad on Malcolm in the Middle you'll already know that he's a fine actor; that he may be the best actor on TV came as a surprise to me as did almost everything else on this fantastic show. Cranston inhabits his character in such a manner as to convince you that acting is not a craft but a high art. Is Breaking Bad the best programme on TV? Well... Some of the performances are a little broad and the humor at times is forced, so it might not be quite up there with Mad Men but Cranston's lead, the snappy scripts, the geeky science stuff and the gorgeous New Mexico locations definitely put it head and shoulders above almost everything else Tubewise. I hope seasons 2 and 3 are as good.
Posted by adrian.mckinty at 9:01 AM