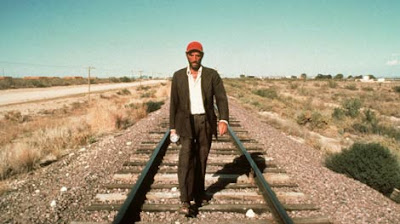 I was watching For A Few Dollars More last night on Fox Classics and remembering what a great film it is; and so, in honour of that, here's a little list of my eight favourite Westerns. Why eight and not ten? Take your pick: laziness or a tribute to Paul the Psychic Octopus?

8. High Noon. Carl Foreman's screenplay, Grace Kelly's close ups, the badge in the dirt, the action playing out in real time. If you don't like this film, I'm sorry, I just don't know who you are anymore.
7. The Searchers. Just about the only John Wayne film I can enjoy these days. Funny, dark, broody and beautiful. John Ford at the top of his game.
6. Paris, Texas. A guy is wandering in the desert. He has amnesia. The good news is that he was married to Nastassia Kinski. The bad news is that he tied her to a fridge and she set their trailer home on fire. His mission is to ride into town, bring mother and son together, ride out of town. BTW, there is no safety zone, apparently.
5. Unforgiven. Clint's mission is to ride into town, kill a couple of dudes, and, er, ride out of town. It all goes to hell and then it rains. David Peoples wrote the script, Richard Harris stole the show. Gene Hackman was pretty good too.
4. Blazing Saddles. Richard Pryor was the unsung hero here and with him this might have been the greatest movie of all time. Still there's the beans, the Nazis, the governor, Maddy Khan. What a flick. 1974 was some kind of Wunderjahr for Mel Brooks and then, alas, zilch.
3. For a Few Dollars More. Best of the spaghetti three. They laugh, they cry, they shoot each other's hats. . .Then the wonderful Gian Maria Volontè breaks out of jail, robs the bank at El Paso and after that it's all: laaah, laaah, la, la, la, la, la, la, la, dada, dah, dah, laaah, laaah, la, la, la, la, la, la, laaah etc.
2. The Wild Bunch. Sam Peckinpah says that this is what happens when men go down to Mexico. When I went down to Mexico I did some nice snorkeling and drank margheritas but when MEN go down there, they machine gun entire armies of baddies. In slow motion. Brilliant.
1. Blood Meridian. They havent actually made this film yet but the movie of it in my head is awesome.
Posted by adrian mckinty at 10:01 AM