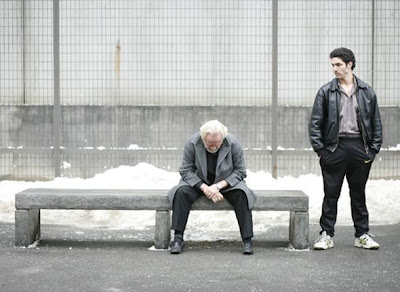 A Prophet is a French crime thriller directed by Jacques Audiard that currently holds a 97% fresh rating on Rotten Tomatoes. It tells the story of an Arab petty criminal Malik El Djebena (Tahar Rahim) who is sentenced to six years in jail for beating up a policeman. For reasons that aren't too clear he falls in with the Corsican mafia in prison rather than the Muslims and reluctantly kills a ludicrously under protected informer to prove his bona fides and get the Corsicans' protection. As a plot device most of the Corsicans are sent to Corsica to serve out their sentences (but not, apparently, the big boss) allowing Malik to move up the ranks. Throughout the film he learns to read and write and somehow establishes his own slap dash criminal network while still making coffee for the boss. The Corsican chief finds out about this and hurts him with a spoon and then - immediately after this spoon incident - decides that Malik and his gang of incompetent hash smugglers are the right men to assassinate an important criminal rival.
...
I really wanted to like this film because I enjoyed Audiard's The Beat That My Heart Skipped and especially after Mark Kermode's gushing review on the BBC, but je ne l'aime pas mostly because the plot was just too ridiculous. A film doesn't have to be logical but it does have to follow its own internal logic and A Prophet doesn't. He's either a criminal mastermind or a dogsbody, he cant be both. Prisons run on the currency of fear and you've either got the shekels or you dont. The director doesn't really understand how prison or organised crime works and his deus ex machina Red Harvest/Yojimbo ending was completely unbelievable. There's a Muslim revelation subtext which feels tacked on and a Henry IV Falstaff/Prince Hal brush off bit that you could see coming from the first ten minutes. The acting is one note from everyone including the lead who has been praised to the skies for this performance. Other reviewers have lauded the vague religious iconography but it might as well have been a man sticking his arm in his jacket and pretending to be that other famous Corsican bandit for all its relevance. Nothing in the screenplay has been thought through too deeply. Stereotypes are everywhere: devout Muslim scholars, long haired Corsican goons, flashy Italian gangsters etc. The one thing I liked was the direction which was supremely confident and bold, but even the best scenes were often undercut by cheesy musical choices. Yes but its 97% fresh, I hear you say. Well, I'm sorry I don't know what film they saw but the 97% are wrong and I'm right: A Prophet is a bit like French pop music - an interesting curiosity but ultimately just fluff that no one should take too seriously. Jacques Audiard can do better and needs to be held to a higher standard.
Posted by adrian mckinty at 10:02 AM