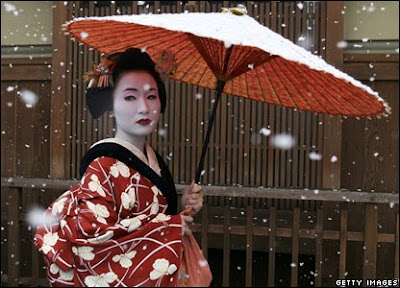 The best book I've read this year is Nicolas Bouvier's travel book The Way of the World which tells the story of his journey from Paris to Afghanistan just after the Second World War. Bouvier's later book The Japanese Chronicles isn't quite as good as that because it's more disjointed, written as a series of impressionistic postcards sent from Japan over a period of several decades. But it is a superior book of travel essays and on every page there is a keen observation or a philosophical side track. Here's a random bit from a Kyoto chapter that gives a pretty good flavour of his style:


Later today in the lobby of my Kyoto Hotel I meet some other foreigners...these are French. After two weeks of cultural circuits they suspect their guides of "not having delivered the soul of Japan." There are some things you don't even say to the woman you love, or to a beloved brother. And these women, who are not stupid, who in Paris would hesitate to change their butcher, demand that before they leave someone should wrap up the 'soul of Japan' for them. What do they want? That through a simple mental process their ignorance can be transformed into knowledge so that they can discuss it when they get home. I judge them, but I too sometimes would like to find my meal set in front of me and fast. We come to this thin and frugal country with our greedy metabolisms. The whole West is that way. The golden dishes, the Maharajas, the rubies as big as duck eggs, that is what the first explorers wanted to see, not the simplicity which is the hallmark of Japan. Here anyone who does not serve an apprenticeship to frugality is definitely wasting his time.
Posted by adrian mckinty at 9:10 AM