The (Not Very Bright) American 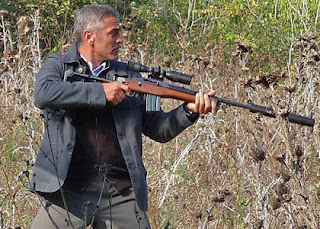 The American wasn't a terrible film. I know this because I didn't walk out of the cinema. But even so the film makers really don't think we in the audience are very clever. There's an old saw that goes "nobody ever lost any money underestimating the intelligence of the public" but I have never bought into that, which maybe explains a lot about my writing career. Anyway here are some of the reasons why I suspect the director of The American takes us to be eejits:
(Spoiler Alert, don't read this if you are going to see the movie.)

1. Clooney has a butterfly tattoo on his back, but in case we didn't get the point he's also reading a book (the only book he reads in the  movie) on butterflies. His girlfriend calls him Mr Butterfly, a butterfly lands on the arm of a woman at a picnic and he mentions that its an endangered type and then at the end the camera lingers on a butterfly taking off. Hollywood just loves to underline the motif because they think we're too dumb to see it on a first pass.
2. The movie playing in the cafe is Sergio Leone's Once Upon A Time in the West. In case we missed that the cafe owner says to Clooney "Sergio Leone, a great Italian director."
3. The priest. Everything about the priest reminded me of the Simpsons's pizza chef who says "you a must excuse a me I'm a just an old Italian stereotype."
4. The female lead was a prostitute. Again. But, ahhh, she has a heart of gold and she falls in love with the male lead. Where have we heard this before? Oh I dont know in about a couple of million Hollywood movies?

5. The song playing in the cafe was "Pas Americano" you know just in case we hadnt gotten the message before.
6. His life is in great danger which is why he picks a different small town where no one will know where or who he is. So why doesn't he leave town immediately after the anonymous note?
7. Why doesn't he leave town after the first assassination attempt?
8. And why doesn't he leave town after the second assassination attempt? Because the film wouldnt be quite long enough?
9. He gets paid how much for basically building a silencer/suppressor?
10. And while we're on the subject he builds a highly sophisticated silencer/suppressor out of an old Fiat crank shaft.
11. How does his mistress get to that place 20 miles out of town on foot and still get there before him when he had a five second gun battle and then drove?
Posted by adrian mckinty at 8:01 AM