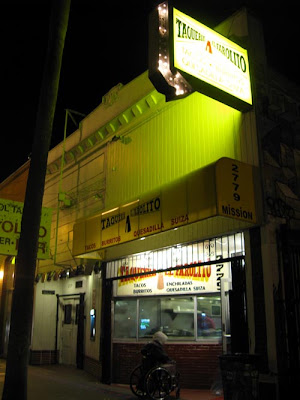 We're just back from spending the last six weeks staying with various family members around the US. Apart from reconnecting with friends and relatives and a few of my favourite cities the thing that will stick with me most is the food. Don't get me wrong, Australia has good food and Melbourne in particular has some great restaurants. Melbourne also has several terrific markets - the famous Victoria Market and my personal favourites: South Melbourne and Prahran. But oh man America does some things really well in a way you just can't get anywhere else; so I thought that I would make a little list of my top 10 US eating experiences from the last month and a half. "Foodies" beware this isn't going to be for you, these are mostly comfort foods, stuff that I would eat on death row as part of the last meal before my execution, not some fancy schmancy well plated nouvelle cuisine ensemble. Anyhoo here they are in reverse order:
10. Cap'n Crunch Cereal, Hollywood Bvd. Los Angeles. You can't get Captain Crunch in Australia for love or money. If you don't know it, it's a truly evil concoction of sweet cinnamony deliciousness that is probably banned under Article 9 of the Geneva Convention. I got my Crunch fix from a CVS on Hollywood BVD at midnight. By 12.20 the box was gone.

9. Krispy Kreme Donuts, Ft Lauderdale, Florida. Yes you can get Krispy Kreme in Australia but not hot, right out of the frier, from the conveyor belt. The melt in the mouth sensory explosion of these fresh donuts is legendary. The KK place we visited was in a strip mall off a lonely highway near the beach. At 10 PM it was still packed full of people from the other side of the tracks enjoying a box of a dozen original glazed - the late night snack of champions.
8. New England Clam Chowder, The Starboard Galley, Newburyport, Mass. The best clam chowder in a breadbowl you will ever get. A meal in itself and you still have the deep fried fish platter coming up! Fresh local clams, fresh cream, home baked breads are the keys here. Don't even talk to me about Legals Sea Food. 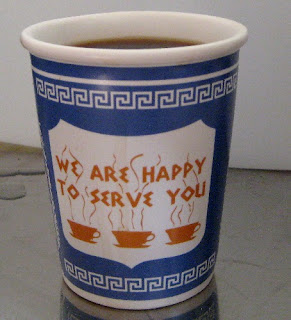 7. A "regular coffee," the Port Authority Bus Terminal, NYC. One of my - literal - bete noires about Australia is how wanky the coffee culture of this country is. For a nation built on a lack of pretensions and no nonsense honesty it's bizarre how their entire mindset has been captured by the latte/cappuccino/espresso bollocks. You can't get a cup of black coffee anywhere in Australia, instead you must ask for a "long black" which is espresso with hot water added. This is somehow classier than brewed black coffee. It tastes vile, costs three dollars, comes in a tiny cup and takes forever to arrive. In America it was a joy to get a decent black coffee anywhere and in New York City I loved getting a "regular coffee" i.e. with lots of cream and lots of sugar for about a buck in every diner, fast food joint and cafe, including the bowels of the Port Authority Bus Terminal. There the "regular coffee" had the ideal blend of sweetnees, creaminess and acrid bitterness. I had it with a bear claw. Bloody marvellous.
6. Chipotle Carnitas Burrito. The Chipotle chain is not really the home of my burrito of choice but its a good substitute when you're looking for a half decent burrito in a big city. The carnitas (pork) burrito is free range and delicious when you get the guac, extra hot salsa, rice, beans and cheese (no sour cream).
5. A chocolate milkshake, the Hard Rock Cafe, Los Angeles. I had never been in a Hard Rock Cafe before and I doubt whether I'll ever be in one again. Its kind of a pricey establishment with dodgy musical memorabilia on the walls and the food is only fair, but oh Jesus the milkshakes! Malt, milk, ice cream, chocolate, whipped cream. A heart attack in a glass and utterly fabulous.

4. Coconut chicken curried stew at the Pho Ha Ten Vietnamese restaurant in Ingleside, San Francisco. My brother and sister in law (Josh and Candace) took us to this happening joint in a nice part of town. The broth was creamy, spicy and delicious, the noodles cooked to perfection and the chicken rich, textured and fantastic. They do a mean mango dessert too.
3. Barbecued pork burrito at El Farolito in the Mission, San Francisco. Now this is a burrito. Wrapped in tin foil you could kill a man with this thing. Big, tasty, fresh, spicy, filling...El Farolito (picture top right) has a great reputation as a late night taco joint, but the burrito I had was the best I've eaten since Illegal Pete's Big Fish burrito in Boulder, Colorado. I had a bit of someone else's made with the refried beans and I thought I'd died and gone to Mexican heaven (without the accordion music of course). 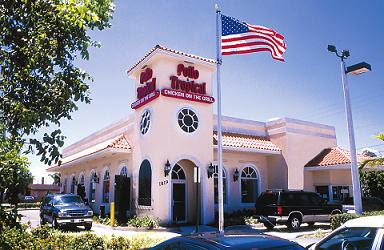 2. A cheeseburger, fries and custard, The Shake Shack, The Upper West Side, New York City. The Shake Shack is the burger bar owned and run by Danny Meyer of Union Square Cafe fame. It operates a bit like the Soup Nazi's place on Seinfeld. You need to know your order in advance, you pay, move to the side and wait. The place is full of goddamn hipsters and I wouldnt be seen dead in there if it wasn't for the fact that the cheeseburger and the custard were among the greatest I've ever eaten in my life.
1. Rice and beans with deep fried plantains, Pollo Tropical, Coconut Beach, Florida. Pollo Tropical is a cheap and cheerful fast food chicken chain a bit like the more common Pollo Loco (at least common in Denver). It's got a mostly Latino clientele who come for the chicken. For me however the rice, beans and deep fried plantains were the culinary highlight of my American trip. I added the store hot sauce and mixed them together and it was the perfect combination of tastes, textures and flavours. The plantains are sell your soul at the crossroads good and the beans are cooked to perfection. This is now my new death row meal and if I could have gotten beer I would have eaten at Pollo Tropical every night. We did eat there half a dozen times and fried plantains for breakfast is a mighty fine way to begin any day, even the day you're about to face the firing squad.
Posted by adrian mckinty at 8:38 AM