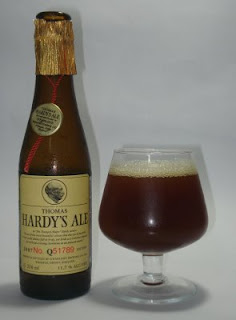 Had a little celebration at the weekend and I decided to break out the last remaining bottle of Thomas Hardy's Ale that I stored away in 2001. Its a bottle conditioned live ale that gets better as it ages. The label explains where the idea for a Thomas Hardy ale came from:
"In 'The Trumpet Major' Hardy wrote of Dorchester strong beer 'It was of the most beautiful colour that the eye of an artist in beer could desire; full in body, yet brisk as a volcano; piquant, yet without a twang; luminous as an autumn sunset; free from streakiness of taste, but, finally, rather heady".

On the now defunct website (the Eldridge Pope brewery went bankrupt largely through horrible mismanagement in 2003) they explain what happened next:

The refurbishment of the Trumpet Major pub in Dorchester was the catalyst for the fledgling Thomas Hardy's Ale. 1968 was the 40th anniversary of the authors' death and what better way to commemorate it than by attempting to bring fiction to life and creating the brew that Hardy imagined. This was to be no ordinary ale. Matured in oak sherry casks for nine months and corked in decorative pint and half pint bottles. The strength was a whopping 12% and it was bottle conditioned. Thus the legend began and bottles were laid down with the expectation of improvement as the beer matured.

Thomas Hardy's Ale is legendary in beer drinking circles. It's up there with the mighty Westvleteren as the holy grail of ales. I put my four pack in storage several years ago and I felt it was time to tackle the last remaining one. So what did I think? Was it worth the wait? Here's my review in the somewhat florid style of Beer Advocate and Beer Rater:
Pours light brown with little carbonation, an immediate aroma of caramel, rust, wet cardboard, apple, dandelion. Looks dangerous, like James Bond in a dinner jacket with a hint of scuba peeking out the collar (Sean Connery of course). At first sip I can taste malt, more apple, acidity on the roof of the mouth, no alcohol, which is scary considering that this is a barley wine. The velvety aura in the back of my throat has hints of caramel, cider, wildflowers and nettles. There are layers upon layers of texture - this beer does more flavours than Meryl does accents (and both under a slightly chilly demeanor). The aftertaste is that of a half remembered kiss in a dark cinema or a shot of moonshine at a country shabeen or the smell of grass as you touchdown after a brilliant breakaway try from the heart of the pack. This is a comfortable, easy going, powerful drink. Opium is like must be like this. The afternotes are of a leather sofa that's been sitting in the Reform Club since 1832, ship's biscuit from HMS Victory, a mysterious, delicious cake that you might find in the fridge of the Tardis. It's really quite spectacular. An amazingly drinkable beer for the style with a gravity defying Kardashian-like behind. Little lace to speak of. No residue in bottle. And of course this beer should be sipped not gulped. A+
Posted by adrian mckinty at 8:06 AM