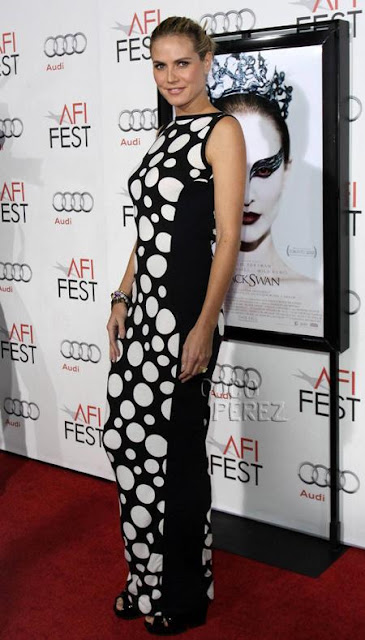 Because we're in Australia we get TV seasons a little bit later than other places which means that I've been doing some catching up in the last few weeks. I have some questions:
1. Has Modern Family always been this funny? Sure I knew Ed O'Neill was funny but I'd heard that MF was a rip off of Arrested Development and wasn't any good. That was a lie. It is good. Maybe a little schmaltzy in the last two minutes but generally funny throughout. The dog butler episode had me rolling in the aisles (especially the seemingly improvised doggy dialogue at the end) and the one with the clown...Seinfeldian.

2. How in the name of all that's holy did Mondo lose Project Runway Season 8? Yes Gretchen Jones is a talented designer, but talent hits the target that others miss while genius hits the target others can't even see. Gretchen's designs came from Portland while Mondo's from some kind of alternative gay-Mexican-gothic universe. Michael Kors complained that Mondo's clothes were too young while all season long he was telling the designers not to be frumpy and matronly. What gives?

3. They cancelled Caprica already? I didn't even get to see one episode. Was it that bad?

4. And speaking of BSG alumni, Grace Park is really in Hawaii Five O? I watched nearly ten minutes of one of those and didn't see her at all but she is on the giant posters Channel 10 have hung up all over town. I would have watched more of H5O but I think I may have slipped into a boredom induced coma or something.

5. Top Gear went to Iraq? When? How? Did Clarkson say something offensive about camel jockeys?

6. Ok so I watched episode 1 of Boardwalk Empire. The one that was directed by Martin Scorsese. My question is this: is this the same Martin Scorsese that directed the Copacabana sequence and the helicopter/guns/pasta sauce climax in Goodfellas? If so what the hell happened to that guy?

7. Has the new season of Breaking Bad started? If not why not? What do chemistry teachers watch when Breaking Bad isn't on? You can't watch Mythbusters all the time can you?


8. Has anyone seen that Jason Schwartzman detective show on HBO? Am I wrong or are they aiming squarely at the wanker/hipster/asshole market with that one?

9. Glenn Beck? A) Crazy B) Crazy like a fox C) Crazy like someone who listened to the Mormon missionaries at his front door and thought, yeah, sure, that sounds reasonable, the Archangel Gabriel appeared in upstate New York with some golden tablets written in hyroglyphics and warned Joseph Smith about the dangers of drinking tea and having only one wife and then after he told a bunch of people the tablets went missing, yeah, I buy that.
10. No, really, Mondo lost? But he was from Denver, probably from Federal BVD by the looks of his house. Jessica Simpson liked his stuff better. Heidi liked his stuff better (and she wore HIS dress to the Black Swan premiere). At one point Nina suggested they make it a tie. Thats 3 to 1 in favour of the kid. Giving it to Gretchen is madder than having a World Cup Final in Qatar! So what happened?!!
Posted by adrian mckinty at 8:01 AM