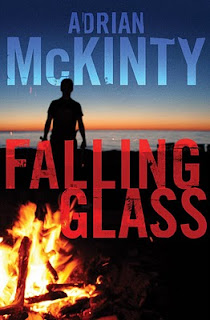 From the great David Park in today's Irish Times:
CRIME: Falling Glass, By Adrian McKinty Serpent’s Tail, 309pp. £11.99
ALTHOUGH IT IS the Scandinavian star that currently shines brightest in the crime-fiction firmament, Ireland continues to publish an increasingly varied and successful body of work. The North alone has contributed a growing list of titles by writers such as Adrian McKinty, Eoin McNamee, Colin Bateman, Paul Charles, Brian McGilloway, Stuart Neville, Sam Miller and Ian Sansom. In David Torrans’s wonderful No Alibis Belfast has its own specialist bookstore that offers customers not only access to a wide selection of crime literature but also the chance to hear writers with international reputations read from their work.


What has prompted this flourishing remains something of a mystery in itself, but perhaps one of the inherent attractions of the genre is that in an unresolved world it offers the reader and society as a whole a sense of resolution, a final answer to all the unanswered questions. In some of the Northern writing there is also occasionally the sense that, either consciously or unconsciously, the crime story restores a new moral order to the nihilistic chaos of the past.


McKinty was born in Carrickfergus, Co Antrim, and has lived and worked in the US, but currently resides in Australia. His latest novel, Falling Glass , follows on from his successful Dead trilogy and his most recent novel, Fifty Grand , which won the wonderfully titled 2010 Spinetingler Award in the rising-star category.


It tells the story of Killian, who was born into the Irish Traveller community, and who has carved a lucrative career on both sides of the Atlantic as an enforcer, a debt collector, someone who can be relied on to get the necessary results with the least possible mess. While no stranger to violence, and not averse to using it with deadly efficiency when necessary, Killian has developed a preference for resolving outstanding issues by the application of his intelligence and his lyrical gift with words. In a world steeped in machismo Killian “had gained a rep for diplomacy”, someone who “could convince people to pay their bills and keep their beaks shut without the necessity of having to shoot them in the kneecaps”.


However, Killian feels weary at the age of 40 and knows that in his own culture, with its reduced life expectancy, he is approaching a kind of old age. He tries to change his way of life and enters university to study architecture, but even premier-league enforcers are not immune to the effects of the recession, and when his purchase of two luxury Laganside apartments leaves him significantly out of pocket he is forced to offer his services for hire once more.


This leads to his taking on the job of finding the former wife and two children of Richard Coulter, a rich Irish businessman and owner of a budget airline, who are hiding somewhere in Northern Ireland. The half-million fee offered to Killian suggests there are darker reasons why Coulter wants them back, and his search uncovers not just a frightened and desperate woman but also a disturbing web of political and sexual corruption that encompasses all the North’s key players. Killian’s search is made all the more dangerous because Rachel Coulter and her daughters are also being pursued by a Russian hitman whose ruthlessness and skills make him a formidable opponent.


McKinty is a streetwise, energetic gunslinger of a writer, firing off volleys of sassy dialogue and explosive action that always delivers what it has promised the reader. The story is skilfully constructed, and the pace is always full throttle forwards. There is one violent scene in Mexico involving a chainsaw that is definitely not for the squeamish, but it would be unfair to think of the author as someone exclusively reliant on external action.

There is, for example, an interesting psychological exploration of Killian’s re-embracing of his half-forgotten roots and the cultural values of the Traveller community. Even the dark figure of Markov, the Russian hitman, gets layered and lightened with some psychological subtleties that are the product of his relationship with his partner, Marina, and experiences of the war in Chechnya that continue to haunt him.

McKinty zaps the story across countries and continents and, either through detailed research or personal experience, renders the locations convincingly. But the bulk of the story’s setting springs from his intimately observed landscape of the North. In the strongest and most impressive part of the novel McKinty blends the landscape of an island in Upper Lough Erne, insightful characterisation and narrative in a particularly creative way.
Despite the genre’s frequent reliance on [violent] resolution, McKinty’s teasing ending deliberately withholds that very thing from his reader, and you sense that Killian may have more stories unfolding ahead of him, and still more travelling across the world’s seas, before he’s finally allowed to disappear into retirement

...Holy Crap! If only all my reviews could be like this! Thank you David Park! Mr Park of course is a New York Times editorial writer and the author of "The Truth Commissioner" one of the greatest and most important novels about the Troubles.
Posted by adrian mckinty at 11:51 PM