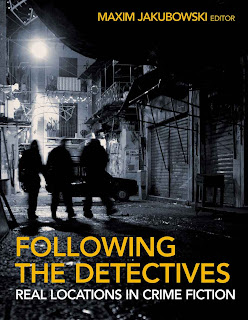 In 1995 I went to Russia for the first time. It was a bit chaotic and slightly dangerous but I really enjoyed myself. Before I'd gone I'd made a map of St Petersburg and I spent a couple of days visiting all the locations in Crime and Punishment. I also went out to the site of Pushkin's duel in the woods and I visited Dostoyevsky's grave. When I moved to New York the first thing I did was visit all the haunts of the beats and when I was at Oxford I decided that my local was going to be The Eagle and Child because that was the local of CS Lewis and JRR Tolkien (and I made a little map of all the places those two guys had lived in in North Oxford). I can't help it, I'm a book geek and I like maps which is why Following The Detectives is definitely my kind of volume. Twenty literary detectives and their tales are unpacked cartographically by several well known crime writers and critics. It is not meant to be a comprehensive guide, it's edited by Maxim Jakubowski and thus reflects what Maxim likes and is into...the good (Dashiell Hammett's San Francisco, James Lee Burke's New Orleans, Raymond Chandler's LA), the bad (Peter James's Brighton) and the ugly (Peter James again, sorry).
...
I particularly enjoyed Peter Rozovsky's brilliant look at Icelandic crime fiction (one of the things I liked about Jar City was the map at the start) and Dec Burke's intelligent take on Dec Hughes's Dublin. In fact all the contributions are excellent and Maxim has done a fine job editing this book. Following The Detectives is definitely crying out for a volume 2 (an iPhone Ap would be fantastic!) and hopefully next time Maxim will broaden his range a little and not leave as much of the heavy lifting to the commendable Barry Forshaw. (Yeah that's right, that was a hint). You can get Following The Detectives at the old rogue's Murder One bookshop in London or at Torrans's No Alibis in Belfast or at Otto's Mysterious Bookshop in NYC or, of course, on Amazon.
Posted by adrian mckinty at 10:36 AM