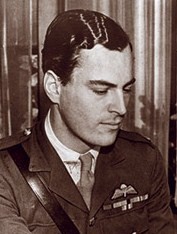 I read the sad news this morning that my favourite writer Patrick Leigh Fermor has died. Fermor was a war hero, a bon vivant, a wit, a polyglot, an impeccable prose stylist and, possibly, the last of the great English travel writers. In 1933 at the age of 19 after failing to get into university Leigh Fermor decided to travel on foot from London to Constantinople. He caught the ferry to Holland and began an epic journey, the first part of which he chronicled in the wonderful book A Time of Gifts. After making it to Constantinople he fell in love with Greece and travelled there until war broke out. He joined the SOE and worked behind enemy lines in Crete. His exploits as a commando were later made into the Michael Powell film Ill Met By Moonlight.
...
Patrick Leigh Fermor is the man as far as I'm concerned. He loved languages, travel, scholarship, cultural differences and most of all people. He never accepted the surface judgement on anything or anyone and preferred to investigate things for himself. A Time Of Gifts is simply the best travel book I've ever read. You can read the excellent Daily Telegraph obituary, here.
Posted by adrian mckinty at 8:29 PM