Northern Ireland Is A Complicated Place 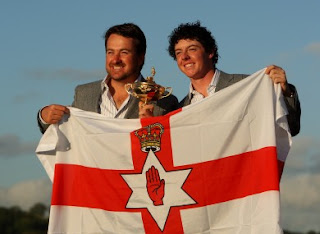 One of the most interesting things about coming from Northern Ireland is how mixed up it makes you feel. Not quite Irish, not quite British, Northern Irish? What is that, exactly? It's so easy to be, say, an American or an Englishman or an Australian. There are so many role models out there who tell you how to do it. The perfect American? Thomas Jefferson or Ernest Hemingway or Mark Twain.  The perfect Englishman? Stephen Fry. The perfect Ozzie? Shane Warne. To embrace this identity is so easy, so straightforward and yet. . .and yet just a teensy bit dull, no? To be Northern Irish is to exist in a nether realm, a grey area, an Interzone ...a place where you can accept or reject your baggage laden heritage or create an entirely new one for yourself. To be Northern Irish is to be in that difficult postmodern space where you make your own laws. Albert Camus understood this. He was a pied noir from Algeria, who wasn't quite African, wasn't quite French. He saw that the really interesting path was the one you took through the looking glass to a land where you created yourself.
...
I was thinking about this as I read an article in The New York Times today on the complicated matter of Rory McIlroy's identity. Niall Stanage took The Times's readers into what for them must have been surprising new territory, as, for the last thirty years or so, the Times's N.I. reporting has had a distinct lack of nuance - the Protestants and the Brits made easy villains and the IRA made easy heroes for a paper with an Irish American readership in the thousands. I remember the days when Maureen Dowd used to openly praise the IRA and attend its fundraisers in Manhattan and of course Long Island is still represented by the thugish buffoon Congressman Peter King who has long been a champion of IRA terrorism. Stanage's article however looks beneath the surface to the curious, confusing, nested identities present in Ulster. He senses that times have changed and Rory McIlroy is symptomatic of that change. Here's a couple of choice paragraphs (below) and you can read the rest at The New York Times.

I grew up in Belfast during the Troubles. I was on the cusp of high school when Barry McGuigan defeated the great Panamanian Eusebio Pedroza to become a world champion in 1985. As I was the product of a family that identified primarily as Irish rather than British — and that was nominally Protestant, yet in reality secular — McGuigan’s Catholic background carried no negative connotation for me. But I was still aware of it. So was everyone else. At that time, in that place, everyone I knew could identify in an instant the religious affiliation of even the most apolitical people who had propelled themselves from Northern Ireland onto a bigger stage. Van Morrison was Protestant. Liam Neeson was Catholic. George Best, perhaps the finest soccer player of his generation: Protestant. Dennis Taylor, a snooker world champion: Catholic.


McIlroy isn’t like that. The only reason I was able to inform McGuigan of the golfer’s religion was because I had made a deliberate effort to discover it. Atop McIlroy’s official Web site sits the flag of Northern Ireland. It was for many years considered an exclusively loyalist symbol, an emblem of raw hostility to Catholics. At its center is the Red Hand of Ulster. The same logo was once seen as sufficiently bellicose to form the focal point of another crest — that of the Ulster Volunteer Force, the organization that murdered McIlroy’s great-uncle. For a Catholic to endorse the Northern Ireland flag would once have marked him out as a quisling in the eyes of many. It would have amounted to an endorsement of an entity where religious discrimination was commonplace.


Some still don’t like McIlroy’s choices. But the grumbles are mostly confined to the shrinking band of irredentist Irish republicans. For the first time, a Northern Irish identity that can be embraced by almost all the residents of that patch of earth may be arriving.  “You can be different things at different times,” Trevor Ringland [the Irish rugby international] insisted. “Here, there is sometimes the pressure to be just one thing. In fact, most of us are mongrels. You can be both Irish and British. It is not one thing or the other."The issues of politics and religion have mattered for a very long time in Ireland, north and south. They have served as badges of pride or belonging for some. But they have felt like traps or prison cages to others.
Posted by adrian mckinty at 10:46 AM