Why I Love St Kilda 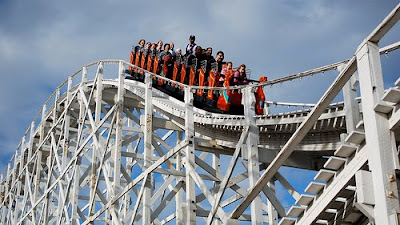 I havent seen the Great Barrier Reef, or Uluru or Canberra. I don't even know Melbourne that well, but I do know my local manor, the lovely, grungy seaside neighbourhood of St Kilda. These are some of the reasons why:

1. The St Kilda Sea Baths. I swim here every day in the cloudy stingy salt water among eccentric Russians, people who wear flippers, octogenarian back strokers, the St Kilda Football Team, the Richmond Football Team and quite an assortment of people obviously on outings from international insane asylums.
2. The St Kilda Beach. Yes, it's got the odd heroin syringe and paper bag and there is a very strange smell at low tide but the sunsets are to die for and in February its like Rio with a slightly smaller chance of being murdered. Paul Kelly says its better than Bondi.
3. Acland Street. Just round the corner from me with its cafes, bars, cake shops, ice cream shops, chocolate stores and Italian eateries. You gain 3 pounds just window shopping on Acland.
4. St Kilda Primary School. Funky,cool, perhaps a little too hip but always fun. Kids actually run into school in the morning. To quote Mr T I pity the fool who sends their kids to private school if they live in this district.
5. Carlisle Street. Where are we, the East Village Circa 1981? Junkies, Hasidim, travellers, prostitutes, pimps, dealers, artists, meth addicts, bakers, poets, buskers, alcoholics, more junkies. Someone should write about these people perhaps in a lavish Broadway musical, loosely based maybe on La Boheme. They could call it Rent! Or, you know, something. I was in my local Hungarian Takeaway next to the library reading a poster on the wall in Yiddish that my wife translated as a comedy called "The Thirty Nine Schlepps" thinking, I like this street.
6. On the same strip of Carlisle you'll find The Local Taphouse voted recently the best bar in Australia. Lots of beers on tap, a great roof deck and scrummy food. Ask for the five beer sampler or the sour ale or the hoppiest beer in the house, or, if you're my mate Adam, a light Pilsner.
7. The Peanut Farm Preserve. Tucked away behind Acland Street is this charming oval where you can watch St Kilda City play quality Aussie Rules. They won their division last year and the City women's team isn't bad either. For a brief interesting time this season SKC's primary sponsor was The California Club, our local brothel.
8. Fitzroy Street. You can't throw a rock without hitting a hep cat on Fitzroy so lets go get some rocks! Or we could just go a trendy bar and watch the beautiful people float by. Recently the New York Times spent 36 hours in Melbourne and much of that time they spent aqui.
9. The St Kilda Adventure Playground. Walk along Grey Street, ignoring the ladies saying hello darling, turn left and you'll find yourself at St Kilda's dangerous sounding but actually quite safe home made playground with trampolines, tire swings, a pirate ship and lots of cool stuff for the kids.
10. Luna Park. For more danger try the wooden roller coaster which I read somewhere is the third oldest in the world. It's genuinely terrifying especially when the wind is up and the whole thing sways. A man stands between the cars with what looks like a giant brake. They also have a ghost train but I don't know what it was like because I kept my eyes closed for the entire ride through that.
Posted by adrian mckinty at 8:04 AM