I Hear The Sirens: The First American Review 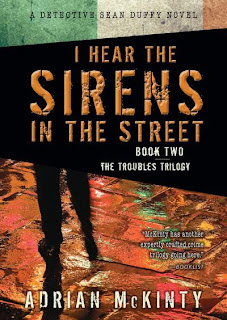 I Hear the Sirens in the Street * (starred review)

A headless torso found in a suitcase presents just the kind of case Detective Inspector Sean Duffy of the Royal Ulster Constabulary wants to pursue, even after he’s ordered to let it go. When the victim is identified as an American poisoned with a rare plant, and the suitcase is found to have belonged to Martin McAlpine—an army reservist and brother of a baronet killed months earlier, presumably by the IRA—the case becomes even more interesting. Especially after the detective who did a perfunctory investigation of McAlpine’s murder reopens that case and is himself murdered.

It’s 1982, when violence in Northern Ireland threatens to escalate after Britain’s invasion of the Falkland Islands pulls away troops that support the RUC. In this pitch-perfect sequel to The Cold Cold Ground (2012), the second in the author’s Troubles Trilogy, Duffy is nearly overwhelmed by politics. This is crime fiction at its best: a police procedural with dialogue that’s crisp and occasionally lighthearted; blistering action that’s often lethal; McKinty’s mordant Belfastian wit; and a protagonist readers won’t want to leave behind when the trilogy ends.

— Michele Lebe
Posted by adrian mckinty at 9:00 AM