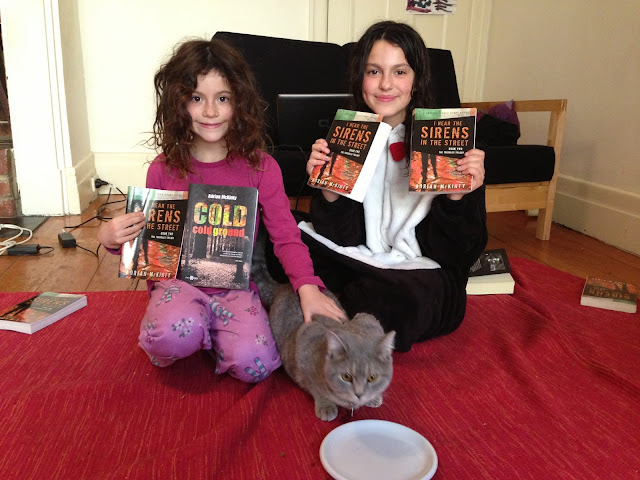 What is George McFly Day? It's the bit in Back To The Future where George McFly's box of books arrives from his publisher and his career as a science fiction writer becomes a reality. If you remember the film, in one version of the present George doesn't follow his dreams to become a writer because he's afraid of failure, but in the altered version of the present a more courageous George McFly does pursue his ambition and when his box of books comes it's a kind of vindication. What makes this George McFly day particularly interesting and exciting for me is that the box of books which arrived today from my publisher (Seventh Street Books) was I Hear The Sirens In The Street which is partly about the DeLorean scandal in Belfast in 1982 and the book actually begins with a quote from Back To The Future (the British version also begins with a Tom Waits song but I couldn't afford to pay the royalties for its use in the US edition). . .Earlier this week I also received the French and Spanish versions of the first book in the Sean Duffy series, The Cold Cold Ground, which both look fantastic. This morning my daughters Arwynn and Sophie gleefully ripped all the boxes of books apart, ably helped by Rocky, our next door neighbour's cat, who sincerely believes that he belongs in our family.