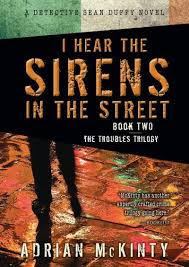 First of all let me wish you all a Happy Bloomsday. Do try and read some Jim Joyce, today, you'll thank me for it...Now down to business...The first North American newspaper review of I Hear The Sirens In The Street came out in last Friday's Toronto Star (Hemingway's old newspaper). It was written by the great Jack Batten who had this to say about the book:
Toronto Star Fri June 14 2013
Jack Batten Book Reviews
I Hear The Sirens In The Street
By Adrian McKinty
Seventh Street Books, 318 pages, $17
McKinty varies radically from other Irish crime novelists in one significant stylistic department. The difference is mostly a matter of humour. McKinty’s central figure, Detective Inspector Sean Duffy, offers the quota of laughs we’ve become accustomed to in Ireland’s crime literature, but unlike the rest of the country’s sleuths, there’s nothing mordant about the Duffy brand of funny stuff. The DI might even be described as optimistic. This is remarkable considering that events in the highly readable new book take place in 1982 when the Troubles meant that explosions, assassinations and spilled blood were daily routines.
Duffy is from the north, a cop working out of a station in a town next door to Belfast. Since he’s also a Catholic, he gets it from all sides, under siege from both the IRA and the UDA. His sense of irony helps him through most crises. Cool nervy and intelligent Duffy drinks his vodka gimlets, watches The Rockford Files on television, and goes about his investigating business with a style that’s mostly unflappable.
Duffy’s latest case begins with the discovery of the dismembered body of an American tourist. The coppers, led by Duffy, chase the clues on a trail that leads our man into dangerous places in Ireland’s political and industrial worlds. If it begins to look as if the country’s unhinged violence is at last going to crush him, we readers remain certain his valour and wit will guarantee survival in the end.
Posted by adrian mckinty at 10:00 AM