In The Morning I'll Be Gone - The First Newspaper Review 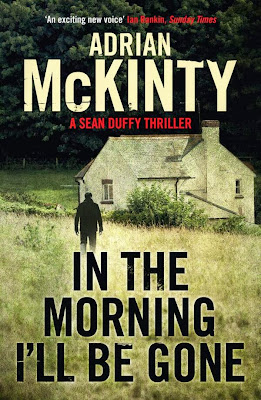 The first newspaper review of In The Morning I'll Be Gone came out this week in Dublin's  Hot Press. The review is by Anne Sexton and is wonderfully spoiler free. For me this book was more of a traditional mystery than a thriller (most of it is taken up with an old school locked room problem) but Anne seems to have enjoyed the noir elements too. Anyway here's what she says in Hot Press:
...
In The Morning I'll Be Gone
by Adrian McKinty
Serpents Tail
Hot Press December 5

Oh, a new Adrian McKinty book? Excellent! Featuring Sean Duffy? Even better! As a reviewer you should approach an album, film or book objectively, so the fact that I think McKinty is one of Ireland’s most interesting crime novelists might have been an issue. Luckily reviewers across the globe are equally enamoured. In The Morning I’ll Be Gone is the third Detective Sean Duffy novel and as with the previous two (The Cold Cold Ground & I Hear The Sirens In The Street) mixes fact and fiction.

The actions begins in 1983 with a mass breakout of IRA prisoners from the Maze Prison. One of the escapees is Dermot McCann, a former schoolmate of Duffy’s. He’s sure that that “with the iron logic of a fairy story” their paths will cross again and this being fiction, they do. The grey, rain-soaked streets; the paramilitary tensions; the cultural and economic poverty of 1980’s Northern Ireland are all almost tangible and McKinty delivers a rollercoaster of a thriller that will keep you turning the pages until the very end.

Anne Sexton
...
The picture to the right is the latest cover art complete with Ian Rankin blurb. After I tweeted the cover I got a nice response from Mr Rankin himself:

Ian Rankin ‏@Beathhigh4 Dec
@adrianmckinty I read it while on tour in Canada. Really terrific, Adrian. Congrats - as is becoming usual!

Hopefully that sentiment will be shared by some part of the reading public. In The Morning I'll Be Gone will be available in the UK, Ireland, Australia & NZ on January 30 and in the US and Canada in March.
Posted by adrian mckinty at 8:00 AM