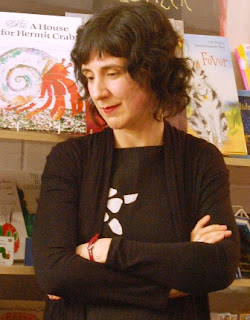 Sinead Morrissey's collection Parallax was one of my books of the year and I was delighted when she was picked as Belfast's first ever poet laureate. Now comes the news today that her poem "A Matter of Life and Death" has won the TS Eliot Prize for best poem of the year. Well done Dr Morrissey!
...
Below is my post from August talking about her appointment as Belfast poet laureate and my attendance at the first public reading of A Matter of Life and Death...
...
Last week Belfast Lord Mayor Mairtin O'Muilleoir appointed Sinead Morrissey as the city’s first ever Poet Laureate. It was an inspired choice: Dr Morrissey is the author of five collections of poetry, she has been widely anthologized and has been shortlisted for the TS Eliot prize three times. Determinedly apolitical Morrissey rejects the labels ‘Unionist’ and ‘Nationalist’ as ‘exclusionary’ and devoid of nuance which is precisely the kind of nimble tight-rope walking required for a poet laureate in a divided place like Belfast. I saw Sinead Morrissey read for the first time last January during the worst of the riots caused by the removal of the Union Jack from Belfast City Hall. I was supposed to do a radio interview at the BBC but because of promised paramilitary road-blocks and demonstrations the police were advising people not to travel into the centre of Belfast at all.
I went anyway on an empty train. Belfast was a ghost town with only a few bemused tourists wondering why the shops were shuttered and the police were in full riot gear. The BBC had a skeleton staff and after my interview I went to see my old pal Dave Torrans at No Alibis (Belfast’s only mystery bookshop) who told me that he had almost no customers. He asked me if I wanted to go with him to a poetry reading where he was hoping to sell a few books. I agreed and we hiked across an eerie, evacuated cityscape with helicopters hovering over East Belfast and ominous curling pig-tails of smoke on the horizon. The poetry reading was at the Ulster Museum near Queens University and despite the road-blocks and the bomb scares the room was packed to the rafters. I shouldn’t have been that surprised - poetry is taken very seriously in Ireland and from bardic times to the present today poets have often been celebrities. Queens is the place that Philip Larkin and John Hewitt called home in the 1950’s and which, a decade and a half later, nurtured the talent of Seamus Heaney, Paul Muldoon, Ciaran Carson, Tom Paulin, Derek Mahon, Edna and Michael Longley among many others.
Sinead Morrissey, born in 1972, is a representative of a new generation of poets who began writing after the first IRA ceasefire in the early 1990’s and the Good Friday Agreement in 1998. Morrissey’s themes are refreshingly contemporary and seldom about the Troubles. She looks at home life and her own personal mythology where she investigates the rich literary traditions of Britain and Ireland and further afield.
When it came time for Morrissey’s turn to read that chilly Saturday in January the atmosphere in the room was electric - in the silences we could hear army helicopters and distant yelling and the boom boom of baton rounds being fired. Morrissey didn’t in fact ‘read’ any of her poems: her oeuvre was entirely memorised and her performance was in the manner of the Celtic fili or court poets. Her poems were from her new collection Parallax (which can be purchased here on amazon) and included a long, poem entitled A Matter Of Life and Death, which was partly about the Michael Powell film of the same name which had been playing on TV as she had been going into labour a few days after her grandmother had died.
When the reading was over I helped Dave Torrans sell a surprising number of Sinead Morrissey books which were grabbed up the way celebrity cookbooks or the latest Dan Brown would be grabbed in other cities. I talked to Sinead about the Michael Powell film which was one of my favourites and I walked home through Belfast’s empty streets reflecting that this was a city where light and dark are always in close proximity and where, for good and ill, history and the symbolic representation of history and the written word are treated with such respect that the flying of a flag or the reading of a book really does seem like a matter of life and death. I can’t think of anyone better to unpack and illuminate Belfast’s dualities and contradictions than its new poet laureate. And here, courtesy of the Atlanta Review, is the poem Sinead read that day:
...


A Matter of Life and Death
Sinead Morrissey

On the aftemoon I'm going into labour so haltingly it's still easy
to bend and breathe, bend and breathe, each time the erratic clamp
sets its grip about my pelvis, then releases—
I take a nap, eat lunch, and while you pen a letter to our impending offspring
explaining who we are, what there is on offer in the house
we don't yet know we'll leave, to be handed over
on his eighteenth birthday like a key to the demesne, sit front-to-back
on an upright chair in the living-room and switch on the television.
World War II. David Niven is faltering after a bombing op
in a shot-up plane. Conservative by nature. Labour by conviction,
he quotes Sir Walter Raleigh: O give me my scallopshell of quiet,
my staff of faith to walk upon, while a terrified American radio girl
listens in. It's all fire and ravenous engine noise—he can't land
because the fuselage is damaged and he hasn't a parachute.
Then, because he'd rather fall than fry, he bales out anyway—
a blip on the screen vanishing into cloud cover. The girl hides her face
in her hands.
The baby drops a fraction of an inch and the next contraction hurts.
I know I'm at the gentlest end of an attenuated scale
of pain relief: climbing the stairs, a bath, two aspirin, tapering down as
the hours roll on (and we relocate to hospital) to gas and air, pethidine,
a needle in the spine, and go out to walk the sunny verges
of our cul-de-sac like a wind-up, fat-man toy, tottering every five minutes or so
into a bow. Nobody's home. The bins are still out on the road
after this moming's pick-up. The light is slant and filled
with running gold. Back inside, the film has switched to Technicolor
monochrome: an anachronistic afterlife in grey in which dead airmen
sign in under 'name' and 'rank', the Yanks smack gum
and swagger, isn't this swell? and a legion of otherworldly women
with hair rolled high as dunes hand out enormous plaster wings
to the just-deceased. The dead are invoiced for,
like battleships or teapots, their names on the list ticked off
as they swing through each allotted doorway clean and whole
and orderly, the incomprehensible machinery of life and death
a question of books that balance. And there's this sudden tug inside,
rigging straining taut and singing, and I cry out for the first time,
and in you come to coax and soothe as though I'm doing something—
running a marathon, climbing a mountain—instead of being forced back down
into my seat by some psychopathic schoolmarm over and over again:
stay. And I think of my granny and her forty-six hours
of agony, shifting my mother from one world to the next, and how that birth
cut short her happiness at the Raleigh bicycle factory in Nottingham
where her youth was spent in secret war work, typing up invoices.
Back in heaven, there's about as much commotion as there's been in a million
years (a slight shake of the head by the woman in charge, a sigh)
because David Niven, who should have arrived but hasn't,
landed on a beach and (how?) survived, met the American radio operator
as she cycled home after the night-shift, and fell in love. He must be sent for.
Down below, they're already looking post-coital: picnicking in civvies
on a homespun Tartan mg in a Technicolor rose garden. I'm not supposed
to show up at the hospital for hours, or not until the cervix
has done its slow, industrial cranking-wide enough to be marked
by a thumb-span, and the problem is I don't know what that means,
or how to tell how much worse the pain is going to get (answer: a lot)
and so the aftemoon grows hot and narrow and you abandon
your confessions altogether and the botched clock of paradise with seven hands
across its face ticks on the wall. I've seen it many times, said my granny,
when a new life comes into a family, an old life goes out—
as though there were checks and balances, birth weighted against death
like a tidy invoice, and a precise amount of room allotted the living.
Before we inch upstairs to the bathroom to test what sweet relief
is granted, after all, by a bath and lavender oil, I catch sight of a magical marble
escalator, the original stairway to heaven, with David Niven
captive on its steps being hauled away to the sound of a clanking bell
from his radiant girlfriend, and I imagine my granny, who died three weeks ago
on a hospital ward in Chesterfield, making room as she herself predicted,
not dumb and stricken and hollowed out with cancer
but young, glamorous, childless, free, in her 1940s shoes and sticky lipstick,
clicking about the office of new arrivals as though she owns it,
flicking open the leather-bound ledger and asking him to sign.
Posted by adrian mckinty at 8:00 AM