The Girl Who Cashed All The Checks 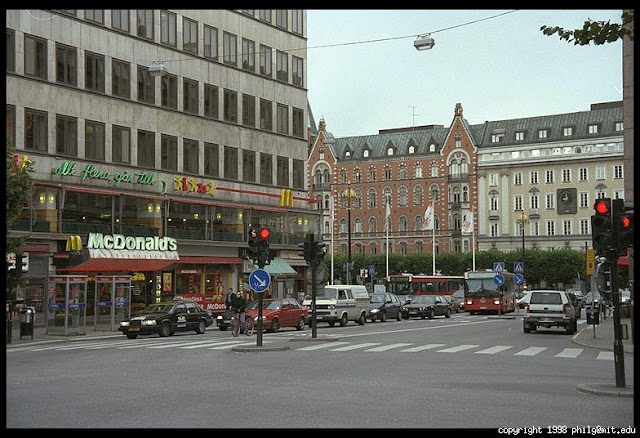 Although it has been heavily embargoed and no preview copies have been sent out I was able to
acquire an early manuscript copy of the controversial new Stieg Larsson novel that his estate has commissioned. I present here the first two pages of The Girl In The Spiders Web. Hopefully the publishers wont make me take this down. I can cheerfully report that although the book was written by a hack Swedish novelist it is up to the high standards of the previous Larsson books. See for yourself:

The Girl In The Spiders Web

Mikael Blomkvist, the ruggedly handsome editor of Millennium magazine woke to the sound of laughter. He opened his eyes and looked around the spare but tastefully decorated bedroom. It was empty. He peered through the window of his apartment on Hantverkargatan Street but no one was on the balcony with an axe or lying flat on his skylight ready to jump through it and murder him. That kind of thing hadn’t happened in months.
Not since his last case - a nasty one where a greedy father and brother had ripped off a journalist's widow leaving her with nothing.
The laughter was coming from the living room. Blomkvist pulled on his Nukes Out T shirt and Cuban Army camo pants and stopped at the mirror on the wall. Yes he still looked ruggedly handsome, he thought and walked into the living room where Helen Hagen was sprawled on the sofa wearing one of his shirts and watching television.
Hagen was a beautiful 28 year conservative American who had been debating with him the previous evening at a packed event at Stockholm University. The debate had been entitled “American Foreign Policy Is a Force For Good”, she had been for the motion, he had been against. Not only had Blomkvist won the debate, turning the hostile crowd in his favour but he had also won over Hagen and had bedded her after showing her that Noam Chomsky’s denials of the Cambodian genocide were perfectly understandable in the context of the American perfidy and lies that prevailed in the Western media in the post Watergate era.
He sat down beside her on the sofa.
“What are you laughing at?” he asked.
“The Daily Show with Jon Stewart. It’s an old episode,” she said in that annoying American twang of hers.
He watched the show for a few minutes. It was a fake dialectic, the sort of thing Marcuse had predicted in 1968, where the population is offered the illusion of choice and dissent, the better to control them.
Blomkvist said nothing and went to make some Eritrean Popular Front fair trade coffee.
“You got a phone call,” Hagen said.
“From whom? The Zionist capitalists who control the media?!” he asked with alarm.
“Someone called Lisbeth Salendar. She didn’t leave a message but she sounded like she was in trouble.”
“I must go!” Blomkvist said pulling on a fair trade sweater, fair trade shoes and a raincoat given him by Olaf Palme for being such a great guy. He ran out of the apartment.
It was early morning in Stockholm but already the streets were filled with people: bourgeois businessmen on their way to brothels filled with underage trafficked Russian girls, fat American tourists with their noses stuffed in McDonalds wrappers, complacent young people with their faces in iPhones built by slave labour in far off China.
When he arrived at Salendar’s apartment she had already left but Salander’s girlfriend, a cool punk rock singer called Bug was waiting for him. Bug was a musician and in the public eye a lot but she was a positive role model for young women, rejecting the patriarchy, the capitalist record companies and the corporate shills. She was a confirmed lesbian with a mohawk and a completely appropriate body fat ratio for her height. In fact she may even have been a little overweight. Not that being underweight or overweight would have mattered to her because she was confident in who she was and unconcerned by contingent western standards of beauty. That’s how cool she was. Yes, a little bit overweight, Blomkvist decided, damning his eyes for objectifying the young woman. Plump even. Ok chubby. But in a good way.
“Lisbeth isn’t here,” Bug said.
“I like big butts and I cannot lie,” Blomkvist said.
Bug stared at him.
“I, I, don’t know why I said that,” Blomkvist stuttered, horrified.
“Was that Sir Mixalot?” Bug asked.
“I don’t know. I appreciate the culture of African American musical artists but at the same time I loathe the sexism of much of the hip hop community.”
Bug looked him up and down. “Well aren’t you a tall drink of water,” she said admiringly.
“What trouble is Lisbeth in this time?” Blomkvist asked quickly. He knew he was irresistible but he just didn’t have the time or energy to convert yet another lesbian thirty years his junior.
“Lisbeth made a surveillance tape of a man who tortures women,” Bug said.
“All men torture women,” Blomkvist said solemnly.
“Don’t go all Andrea Dworkin on me,” Bug said. “Just stay focused and watch the tape.”
Blomkvist and Bug watched the tape. The violence inflicted on the women was shocking. Blomkvist called up the owner of Millennium magazine.
“A famous rich Swedish industrialist has been kidnapping and torturing young women,” he said.
“Who is this? What time is it?” a sleepy voice replied.
“Let me take twenty minutes out of your morning to explain exactly how these young women were violated and tortured in graphic, lurid detail,” Blomkvist said.
“Wait, who is this?”
“First he would tie them up, then—"
"I think you have the wrong number, I'm not--
"Then he would bring out the chains and dildoes."
"I'm hanging up, weirdo."
Click. Dialtone. "My God. They are already closing in," Blomkvist said his eyes wide with terror.