My Favourite Beers of the Last Few Months 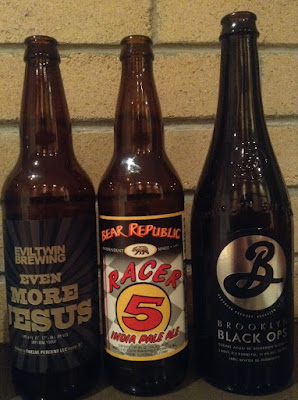 Our New York sojourn is nearly over. We were here for a couple of months while the kids were off for the summer hols (the seasons are reversed in Oz) and Leah was on sabbatical doing research into Mad Magazine. (Leah wrote this piece on meeting Al Jaffee, here.) What I was doing here was mostly catching up on my reading, museum visiting and drinking. (Oh for the life of a writer sometimes, eh?) I also had some reviews to write and one stressful deadline so don't think it was all cream puffs and knishes (although I have eaten a lot of cream puffs and knishes). But anyway what I wanted to talk about is the beer. I've worked my way through quite a few beers on my beer to do list and I've come up with my three favourites that I hadn't tried before:

1) Brooklyn Black Ops: This is a Russian Imperial Stout brewed seasonally by the Brooklyn brewery in Williamsburg. I actually made a little pilgrimage out there to get some of this stuff because I'd heard good things. The beer pours black with a huge creamy head. Vanilla & bourbon notes in the nose and the taste is toffee, oak, bourbon, malt, chocolate and molasses with a dry, sweet powerful aftertaste. A wonderful beer.

2 Even More Jesus from The Evil Twin Brewing Company. The Evil Twin Brewing Company also began in Williamsburg and has an interesting story that I don't really want to get into here. Even More Jesus is also an Imperial Stout. It pours black and thick like the Exxon Valdez oil slick. A solid brownish siennaish head. The nose is barley, licorice, bourbon, wood and the taste is: barley, bourbon, toffee, dark chocolate with a nice kick in the teeth in the finish. Another amazing beer.

3) Bear Republic Racer #5 is a boring old IPA but a rather nice one at that. Pours your bog standard amber colour but that thick white head stays forever like a frothy brew served to you by some adorable wench in the Oktoberfest. Smells of hops, orange peel and lemon. Taste is smooth, hoppy, fruity and very sessionable. I love this stuff. The Bear Republic brewery is in Sonoma County, CA which is odd because I'd been told that California beers didn't distribute that well in NYC. Russian River stuff for example is next to impossible to get. Still I'm glad this beer came and made the trip. And I'm glad I made the trip too.
Posted by adrian mckinty at 12:00 AM