The Australian Reviews Police At The Station

its tough to get newspaper reviews for the sixth book in what essentially is a cult series, but there have, fortunately, been a few. Here's Peter Pierce in the Weekend Australian:

There are abundant talents in the crime fiction business, one of them an immigrant to Australia from Northern Ireland, via the US. Adrian McKinty had originally planned a Troubles trilogy, set in Northern Ireland in the 1980s and featuring detective (and sometimes inspector, depending how much strife he has caused) Sean Duffy, a bleakly joking, poetry-quoting Catholic in the Protestant-dominated Royal Ulster Constabulary. 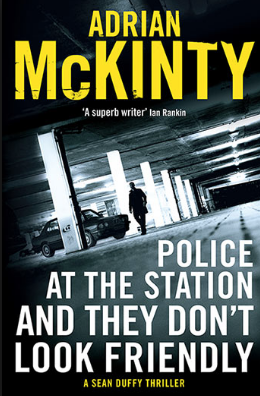 McKinty is alert both to the deep past and the present agonies of the province. In the Police at the Station and They Don’t Look Friendly, and it’s perhaps the best of the lot in the wit of its dialogue, inwardness with the sectarian bitterness of the damaged province, and — essentially — in having a complex and memorably flawed hero in Duffy. In a brilliant opening scene — deadly and funny — Duffy is taken into an ancient word, ‘‘a relic of the Holocene forest that once covered all of Ireland’’, where ‘‘a huge fallen oak lay like a dead god’’. His captors are an IRA hit squad intent on silencing Duffy before he detects a long-rumoured mole within the upper tanks of the RUC.The first three books were so successful that Melbourne-based McKinty has stretched to a sixth,
As Duffy ruefully reflects, ‘‘there’s no future in this country’’. That means there isn’t one either for his partner Beth, who is writing a thesis on Philip K. Dick at Queen’s University, or their infant daughter Emma.
Meanwhile Duffy is able to skip a St Patrick’s Purgatory pilgrimage with his father because a drug dealer has been killed with a crossbow bolt on a housing estate which may be, ‘‘[an Ulster Volunteer Force-] ridden shithole filled with whores, druggies and scumbags’’. Duffy arrives at ‘‘the unhappy window between people returning from their morning dole appointments and daytime TV kicking in’’.
The novel is sympathetic, funny and despairing in depicting the social landscape that McKinty acutely recalls from his youth. Belfast is a paradigm for future cities: ‘‘mined and fractured, walled and utilitarian’’. Textile plants and shipyards have closed, and the showdown is staged in a dank, abandoned factory. Some, such as the dour, upright, hilariously deadpan Sergeant McCrabban (a triumph of the series) resist the collapse stoically.
Duffy prefers mordant wit that graces nearly every page. When the Bulgarian translator called in to help with the crossbow murder praises the local beer, Duffy reflects that ‘‘Harp was an acquired taste like coprophagia or getting pissed on by hookers’’.
More direly, he has to repulse an attack on his house, investigate the murder and find a scheme to entrap his suspect.
McKinty handles all this business with intelligence and elan. Crime is the subject, but Police at the Station and They Don’t Look Friendly will prove to be one of the best novels to be published in any genre this year.
Posted by adrian mckinty at 8:00 AM