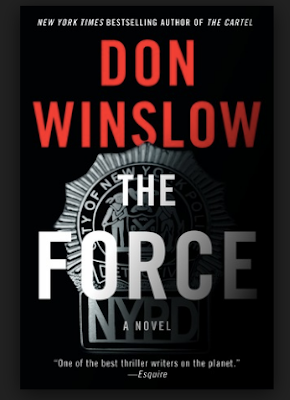 my review of the new Don Winslow in the Sydney Morning Herald...

In 1995 the crime writer James Ellroy published American Tabloid, a novel so revolutionary in its scope, narrative arc, prose style and structure that it immediately raised the bar for all other writers in the genre. Ellroy was the heavyweight champ and if you were going to compete with him you needed to produce something big, brassy and bold.

American crime fiction has thrown up many important talents in the last twenty years but perhaps only Don Winslow, Dennis Lehane and Richard Price possess the requisite skills to get into the ring and challenge Ellroy.

The Power of The Dog (2005) was the book that established Winslow’s brilliance beyond a reasonable doubt for we crime geeks, but it took until 2015’s The Cartel for the rest of the world to catch up. The Cartel won the Dagger Award, was the subject of a lengthy review article in The New Yorker, became an international best seller and was optioned for the movies by Ridley Scott.

Dog and Cartel were two long novels about how America’s war on drugs corrupts everyone and everything. Winslow’s new book The Force is an epic crime novel about a corrupt cop and his crew in contemporary New York.

Detective Sergeant Dennis Malone leads the Manhattan North Special Task Force, an elite unit established to combat drug gangs, organised crime and gun running. Years of undercover work and dirty deals have compromised Malone and his cohorts so that by the beginning of the book they are a well oiled thieving machine. Skimming from dealers is the normal operating procedure for a crew who manage to put enough of the bad guys behind bars to keep the heat off. Malone’s corruption is entirely believable as Winslow’s novel draws on several real life cases, particularly that of Detective Michael Dowd in the notoriously dirty Seven Five precinct.

Of course all good things must come to an end and when Malone kills a drug kingpin and hubristically lifts $4 million and 20 kilos of heroin from the scene of a major drug bust he draws the attention of not just Internal Affairs but also the hated Feds.

Malone is told that they will put him away for a long time unless he cooperates and helps them take down the bigger players. This is the second act turn we as readers are hoping for and I really enjoyed this look into the rules and mores of what a cop will and won’t do to his brother officers. You can rat on a dirty district attorney or a crooked politician but as Frank Serpico discovered more than three decades ago ratting on a brother cop takes you into a really complicated moral maze. Especially in a New York Police Department still in recovery mode from the long lasting psychic damage of 9/11.

One of the most interesting aspects of The Force is its geography. New York’s Upper West Side is cozily familiar to viewers of Law & Order and in the Marvel Cinematic Universe Midtown Manhattan has been the setting for so many Gotterdamerungs with gods, aliens and killer robots that probably every teenage boy on Earth can navigate his way blindfold through Times Square. White New York is a cliché and Winslow is shrewd enough to realise this, so he takes us north into the old Chester Himes territory of Harlem, Washington Heights and Jackson Heights. In the wealthy, gentrified Manhattan of 2017 there is still an invisible line that runs across the island through 125th Street. North of the line is where the action is.

The Force therefore has an original setting, a fascinating lead character and a tense and exciting third act. It’s a brilliant, big, messy, ambitious blockbuster of a book and exactly the kind of thing that American crime writers should be doing if they want to knock Mr Ellroy out of the ring. A+
Posted by adrian mckinty at 8:32 PM