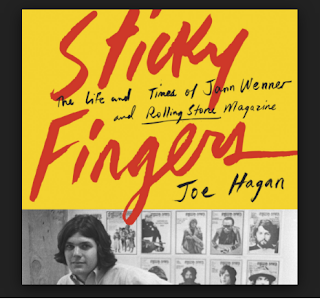 Sticky Fingers is a much better book than it has any right to be. This is an official history of Jann Wenner and Rolling Stone Magazine and as such it could have quickly become one of those hagiographic puff pieces which were the bread and butter of Rolling Stone for much of its early history. This is Joe Hagan’s first book and he was personally selected for the task by Wenner so my expectations were not particularly high for Sticky Fingers’s objectivity or readability. In fact the book is a terrific read and surprisingly critical of Wenner’s motives, tastes, ethics and loyalty.
Wenner was born into a wealthy California family who made their money selling cut price baby formula. A somewhat demanding child he was  packed off to boarding school in Los Angeles at the age of thirteen in 1959. It was at the exclusive Chadwick School that Wenner seems to have developed his addiction for celebrity, preferring to hang out with the children of movie stars.
After graduation Wenner moved back to northern California just in time for the explosion of the San Francisco music scene. After dabbling in journalism, Wenner married the beautiful Jane Schindelheim and promptly hit up her parents for a loan to start his own rock magazine. Mixing reviews, gossip and marijuana recipes Rolling Stone struggled to find its feet until Wenner scored a long form interview with his idol John Lennon who was in the mood to dish about the break-up of the Beatles and his problems with Paul McCartney.
Rolling Stone rode the coat-tails of the Lennon interview for years and printed every word of John, Yoko, Paul, Mick, Bob etc. as if they were gospel. Wenner made deals with record companies, managers and bands and unsurprisingly the record companies who bought advertising in Rolling Stone tended to get better reviews for their products than those who didn’t. As Hagan points out in a key passage if Wenner only had one great idea it was the notion that the Sixties “for all its passion and idealism was at its sacred core a business.”
Perhaps Wenner’s real talent was for nurturing talent. He effectively kick started the career of photographer Annie Leibovitz. He discovered writer Cameron Crowe, encouraged Tom Wolfe to write a novel and it was Wenner who sent “Gonzo journalist” Hunter Thompson to Las Vegas to gather material for an article and book. Wenner subsequently fell out with all these people as his interest in art declined and his desire to make a lot of money became paramount. Wenner founded three other magazines, sold a stake in Rolling Stone to the Disney Corporation and was a founding member of the Rock and Roll Hall of Fame.
Hagan takes the story of Wenner and Rolling Stone all the way up to 2017 but the last two decades of this narrative are not terribly interesting. Rolling Stone was past its peak by the 1990’s with its readership skewing to an increasingly elderly demographic still tragically spellbound by Beatles, Stones and Who minutiae.
The Rock and Roll Hall of Fame chapters are fascinating as an insight into Wenner’s pedestrian tastes. Unimpressed by metal, grunge, punk, R&B and hip hop Wenner put Bono of U2 on the cover sixteen times before he himself conducted a fawning 16,613 word interview in 2005.
Wenner’s personal life is a lot less interesting than his professional one. We get the obligatory 1960’s acid tests, 1970’s marathon drinking sessions and 1980’s cocaine nights. Wenner’s long suffering wife Jane seems to have put up with several affairs until finding herself genuinely shocked when Jann came out as gay in 1994.
Wenner continued to make money hand over first and it was only the 2008 financial crash that spared us from a series of Rolling Stone hotels complete with Gonzo clubs that would stage musical versions of Fear and Loathing in Las Vegas.
In his Afterword Joe Hagan explains that Sticky Fingers was written in the quietude of a New York monastery and this has clearly helped the quality of the book’s excellent prose. Gossipy, scabrous, cynical, reflective and ultimately compassionate, Sticky Fingers is one of the best biographies I have read this year.
Posted by adrian mckinty at 5:52 PM