On The Road Again

With the Australian release this week of the new Cormac McCarthy film The Road, I thought I would re-repost my review of the book from January of last year.... 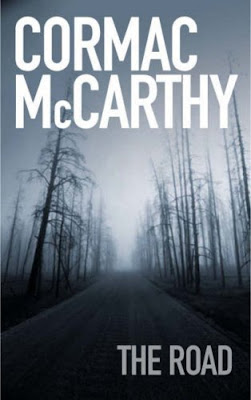 You always know how a Cormac McCarthy novel is going to end. The strong man will vanquish the weak man. The man more versed in knife fighting will best the novice. The man with the shotgun bandoleer will save the child of the man armed only with an empty pistol. The bald headed immortal will kill the illiterate wastrel who is the witness to his crimes. And it's always men doing the killing. Women seldom appear and when they do they're usually doing the dying or being fought over like heroines of the silent screen.
...
I've been reading Cormac McCarthy since the 1980's when I discovered Child of God in high school. I tore through his Tennessee novels and his Texas novels and his crime novel and at the weekend I finished his science fiction novel The Road. I've had misgivings about McCarthy's plots before (I've never liked the scene where they make gunpowder in Blood Meridian) but never about his prose. McCarthy writes as though its the 1640's and he's a pamphleteer warning a nervous populace that the apocalypse is imminent. His words are careful, atavistic, beautiful. His sentences are as crisp as haiku, his chapters as epic as Miltonian books.
...
The Road begins seven or eight years after a comet has struck the Earth. Society everywhere has collapsed. Chaos reigns. And by chaos I mean cannibalism, slavery, murder, rape; the only organisation that seems to exist in this entropic, Hobbesian war of all against all is from isolated bands of anarchists who may or may not be benign. Into a wasted landscape (where photosynthesis has ceased and most animal phyla are extinct) a man and a boy are heading south before the brutal winter comes. The man can barely keep going, but he has to as the boy's mother has cut her throat in despair not too long before the book begins. The weak mother has failed her child but the resourceful father will not give up. In wonderful scenes he finds hidden springs, apples from an orchard, an old can of Coke and fuel for a fire. He gives everything to the boy and they dodge marauders and enslavers and those terrifying cannibals.
...
The story is as harrowing as any Cormac McCarthy novel since Outer Dark but the prose is just as carefully wrought as his previous works. McCarthy thinks long and hard about how a word will sound in a sentence and if the word doesn't quite work he'll find a better one. I listened to The Road as an audiobook and there were times when it was like being privy to some secret ceremony in which magic spells were being chanted for my ears alone. Often the book would get too much and I'd have to unplug my iPod and listen to the silence for a while.
...
Having said that though, I knew how the story was going to finish - though it (spoiler alert) turned out to be the Far From the Madding Crowd in McCarthy's rather Hardyesque universe. And of course all of my problems with McCarthy the artist are still there. The urban is disdained, the rural worshipped, women in The Road are the strange, enfeebled creatures beloved of patriarchal religion, while the male lead is the strong, silent type who - of course - is good with his hands. Mussolini would have enjoyed this book and doubtless The Road is a best seller among survivalists. No, Mussolini isn't quite the person I'm looking for. Nietzsche is closer to the mark - the great German prose stylist par excellence who also dismissed women, townies, the weak and people who talked too much; McCarthy - in a different branch of Germanic - treads through similar terrain. Although he's probably America's greatest living novelist with more poetic depth, lyricism and psychological insight than his contemporaries, his adulation of strength does get a bit wearisome after a while and I can't even imagine what the poor love thinks of a film like Brokeback Mountain. I do recommend The Road (and the other McCarthy novels) but I was quite relieved when it was over and as an antidote I watched Annie Hall - there the guy doesn't quite win either, but he doesn't have to hit anyone to show that he's a man; and he's funny.
Posted by adrian mckinty at 8:07 AM