How Many Fingers Am I Holding Up? 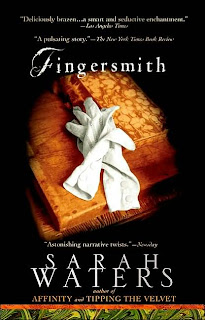 In the Victorian Era 62,457 novels were published in the United Kingdom*. No one has read all of them. I managed most of the Brontes, Dickens, Thackeray, Trollope and the under appreciated Wilkie Collins but it was Thomas Hardy who killed Victorian fiction for me. The unhappy ending was always telegraphed ahead (with one notable exception) and Mr Hardy had the minaturist's ability to spend 16 pages describing a particular section of a particular heath. Victoria died in 1901 and the novel has undergone many changes for the better and worse since then and we certainly do not need any more Victorian novels. Still every year a few do come out. (The Quincunx is an example of a particularly good one.) By Victorian I mean, at the very least, the historical period but not merely that: the difference between a historical novel and a Victorian novel is the attempt the author makes to reproduce Victorian prose, or in the case of Alan Moore's The League of Extraordinary Gentlemen, a Victorian Boys Weekly. It's a tricky balancing act, you want to be authentic but your pastiche can't seem phony and certainly should not be irritating.
...
Fingersmith, is one of those rare novels which succeeds as a piece of faux Victoriana, a historical novel, a mystery and a great page turner. I'm always nervous starting a book like this, but Fingersmith exudes intelligence from every page and I quickly relaxed. Sarah Waters is a gifted, thoughtful novelist whose impeccable prose style, assured voice and devious plot make this an enjoyable read. I'm not a big fan of spoiler reviews, so here I will only give the initial set up: Sue Trinder, is an orphan raised by her adoptive mother, Mrs. Sucksby in an Oliver Twist like den of thieves. She is sent to help conman Richard Rivers seduce a wealthy heiress, Maud Lilly, by posing as a maid in Maud's house and gaining her trust (with the idea that she will eventually advise her to run off with Richard). Once they get married, Rivers will commit Maud to a madhouse and everyone will split the loot. This I emphasise is only the initial set up and the novel charts an exciting and bumpy course from then on in. Sarah Waters has a rather unjustified soft core reputation (at least in this novel) so don't read her for those reasons; however if you do like smart, slightly challenging mysteries I couldn't recommend Fingersmith more highly. Sarah Waters new novel The Little Stranger is now in shops.
...
*BTW I could not be bothered to do the research on the exact figure of novels published between 1837 - 1901 so I just made this number up, but it's bound to up there in the high tens of thousands, isn't it?
Posted by adrian mckinty at 10:01 AM