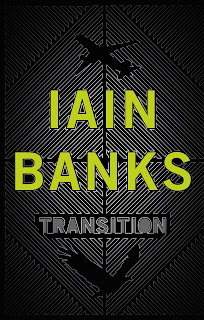 The fun of an Iain Banks novel is largely in its plot which makes it hard to review this book without giving away spoilers. I read none of the literature which came with the galley kindly sent to me by Little Brown so that I could ride the twists and turns of the narrative with genuine surprise. Perhaps then read this paragraph as one long SPOILER ALERT. (I am however only going to give the basic premise below so with that in mind read on or not as you wish).
...
Whew, ok, if you're still with me and you don't know who Iain Banks is that means you're probably living in North America because most of the rest of the world has been on the Iain Banks express for a couple of decades now. Let me briefly catch you up. Banks is Scottish and lives in Fife well outside the orbit of the London literary set which largely inoculates him from their solipsistic bad habits and allows him free reign to give us stories and characters without a lot of lit-crit baggage. In other words he produces page turners. Banks writes contemporary fiction often with a political or conspiratorial thrust under his own name, but he also writes science fiction novels under the name of Iain M. Banks.
...
To slightly confuse matters his new book Transition is available as an Iain Banks novel (the edition I got) and as an Iain M Banks book. I think the reason Banks isn't just calling it straight sci-fi is because his science fiction novels are mostly space operas set in a high tech universe whereas Transition takes place on contemporary Earth - actually, as we'll see, Earths. I've been a fan of Banks since I read the first two of his Culture books in high school and I slightly prefer the sci-fi stories to the contemporary ones which made it all the more exciting to find myself in the middle of an Iain Banks novel (no M.) which was a cross dimensional romp across alternate universes.
...
The premise of Transition is the logical extension of Hugh Everett's Many Worlds hypothesis in which every quantum reaction creates an entire new universe. This idea was concocted to explain some aspects of the collapse of the quantum wave form and it's one that I've never really bought into, although the device has been used as a staple in science fiction for decades. It means that are an infinite number of alternate Earths existing in a multi-verse: there's the Earth where Napoleon won Waterloo, the Earth where dinosaurs didn't go extinct, the Earth where Nazis won the war (a depressingly popular place for writers) and so on. Banks however only uses this idea as the geography and his book is about a group of agents who jump between the multiverses using a synthetic drug, which frees their minds to float across the dimensional barriers. They jump to fix things, killing potential Nazis, rigging elections etc. so that the bad guys lose a little ground in the universe and the good guys make incremental gains.
...
Banks builds his story polyphonically showing us several different points of view, including those of an assassin, a torturer, an agent controller and a mysterious patient in a hospital bed. The book takes place in 2009 and was evidently written last autumn which gives it a breathless quality I very much enjoyed. Transition in fact is vintage Banks: fast, exciting, funny and every enjoyable. There's a bit more sex than usual and this being Banks it's sex with an interdimensional twist. Banks juggles the characters well and keeps the story ticking along nicely. In terms of pace, diversity of voice and Big Ideas Transition reminded me of his underrated Feersum Endjinn which I think is the best of his non Culture science fiction novels.
...
A few minor quibbles: Banks does not explain the hard science of the jumps between worlds (just as he never explains the hard science of the hyperdrives in his Culture novels) and this will either be a relief or an irritation depending how far up the geekdom Y axis you happen to be. Banks's politics too can sometimes be a little intrusive and although in Transition he mostly keeps his views on the back burner his swipes at libertarianism would be a bit more sophisticated after a look at, say, Robert Nozick. And I'll admit that I groaned as soon one particular character said that "Mrs Thatcher was a Saint" and that "Scotland was a miserable land full of midges and Scots," - from that moment on I knew the poor fellow was as doomed as a random red shirt on a new planet. But these are minor issues. Transition is a taut, assured novel from a writer at the top of his game; for my money it is Banks's best book in a decade and is far and away the most original thriller of the year.
Posted by adrian mckinty at 10:30 AM