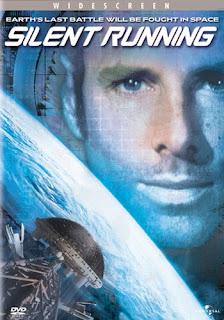 Moon by Duncan Jones is the second film I've seen in a year which pays homage to the cult sci-fi flick Silent Running (1972). The other film was Wall-E whose first third is in some ways almost a direct sequel to Running.
...
Moon is the story of an astronaut on a mining colony on the moon trying to cope with isolation and paranoia. The plot, of course, is another take on Robinson Crusoe but the visuals, the pace, the themes are homages to 2001: A Space Odyssey and Silent Running. Everyone has seen 2001 but few people outside sci-fi geekdom have caught Running, which is a shame because it's a good film. Here's the excellent Wikipedia summary of the story:

Silent Running depicts a future in which all plant life on Earth has been made extinct, except for a few specimens preserved in a fleet of space-borne freight ships converted to carry greenhouse domes. When orders come from Earth to jettison and destroy the domes, the botanist aboard the greenhouse-ship 'Valley Forge' (Bruce Dern) rebels, and eventually opts instead to send the last dome into deep space to save the remaining plants and animals. The film costars Cliff Potts, Ron Rifkin and Jesse Vint.

I thought I was the only person who'd actually seen Running which tended to be shown at 1 a.m. on BBC 2 in the 1980's, but clearly people at Pixar watched it and liked it and Duncan Jones liked it too. Anyway you can get it on Amazon and some sneaky fellow has uploaded the entire film onto YouTube in 10 minute segments here. It's Bruce Dern's best role and although a little bit hokey near the end I think you'll like it.
...
Ok, that's it, I'm proud of myself that I got through this whole blog without mentioning once that Duncan Jones is David Bowie's son. . . Oh crap.
...
I should also add that I'm going to the countryside for a few days so if I dont respond to your comments its because I have no internet connection (or have been killed by the terrible and dreaded bunyip)
Posted by adrian mckinty at 10:01 AM