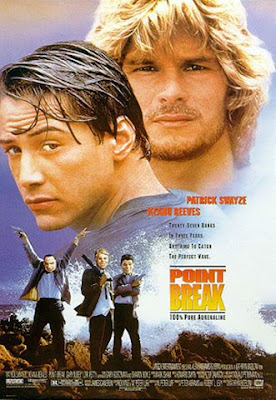 Last December I was lucky enough to go surfing in several places along the coast west of Melbourne including Apollo Bay and Bells Beach. I'm an out of shape 40 year old Irish guy from Belfast so it wasn't anything spectacular: small wave surfing on a long board. But I was thinking about it today. At the end of Point Break, Patrick Swayze ends up in Australia and goes out to Bells Beach to die on the wave of a 100 year storm. Of course the scene at Bells was really filmed somewhere on the Oregon coast but that's not the issue. What I'm trying to say is that I really liked that goofy movie Point Break and I'm sorry that Patrick Swayze is no longer with us. One of journalism's rare voices of sanity Joe Queenan had a nice piece about Swayze in the Guardian today. You can read a couple of paragraphs he wrote about Point Break below and you can read the rest of the article here.
...
"The 1991 Kathryn Bigelow film, in which Keanu Reeves plays a fabulously good-looking though not especially cerebral undercover cop, revolves around a gang of surfing bank robbers led by the disarmingly philosophical Swayze. The very idea of making a movie about surfing, philosophical gangsters led by Swayze, who Reeves vows to bring to justice, reaffirms why America is such a great country. Anyone can make movies about good love gone bad. Anyone can make movies about the lives of others. But we make movies about surfing bank robbers who spout Buddhist wisdom to undercover cops named Johnny Utah. And we have the good sense to cast Swayze in them.