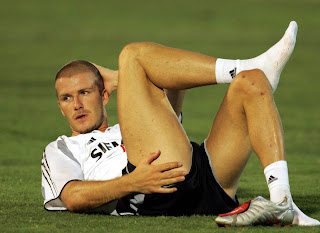 I like Carol Ann Duffy's new poem for David Beckham although it confirms in my mind that the current poet laureate is definitely a lot more English than Scottish. News of David Beckham's achilles tendon injury and the fact that he may miss the World Cup has brought nothing but rejoicing north of the border and a gloomy resignation south of Hadrian's wall. Anyway here's the poem, courtesy of the Daily Mirror:

Myth's river- where his mother dipped him, fished him, a slippery golden boyflowed on, his name on its lips. Without him, it was prophesised, they would not take Troy.

Women hid him, concealed him in girls' sarongs; days of sweetmeats, spices, silver songs...
but when Odysseus came,

with an athlete's build, a sword and a shield, he followed him to the battlefield, the crowd's roar,
and it was sport, not war,

his charmed foot on the ball...