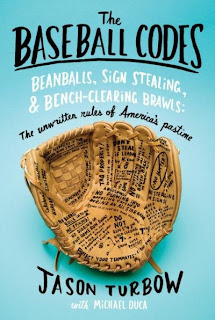 As the World Cup begins and sleep vanishes from my life for a month, of course, I feel the urge to blog about, er, baseball. You know why baseball is the greatest sport? Because no other sport is as geeky, arcane and downright strange as baseball. Baseball is a spectator sport for math majors and science nerds. It also attracts more historians and biologists (well Stephen J Gould) than any other game. Baseball is an art form and a kind of secular religion. Like all good religions baseball is full of mysterious rules and codes that insiders (i.e. ballplayers and the elect) know about, but lay people often do not. For instance I knew about a couple of the rules surrounding a no hitter: 1) you must never talk about the possibility of a no hitter for fear of attracting the wrath of the mighty jinx 2) once a no hitter is a possibility (say around the seventh inning) the opposing team is no longer allowed to bunt a man on, but there are many more conventions. I also knew the home run rule: you must never stand in the batters box after you hit a home run because this shows up the pitcher, a la Barry Bonds, instead you must run around the bases. There are dozens of other honor codes, hidden rules and unspoken niceties that are fascinating for that baseball nut in your family. The Baseball Codes by Jason Turbow and Mike Duca takes you into the heart of the secret society by violating the number one code of the playground, the jailhouse and the baseball diamond - you don't snitch. Ever. But I'm glad they did.
...
I also liked the cover which reminded me of Allie's baseball mitt in Catcher in the Rye.
Posted by adrian mckinty at 12:00 PM