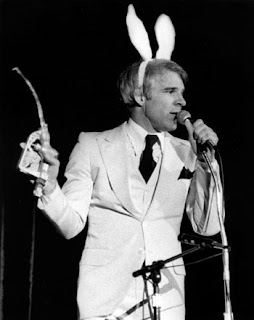 In a recent interview Werner Herzog explained why he lives in LA not New York: "LA generates culture, but all New York does is consume it." I thought of this when I read this depressing story in The New York Times about a Steve Martin talk at the 92nd Street Y. He was being interviewed about his new novel set in the art world and about art collecting in general. Sol Adler, the Y’s executive director was horrified. The Times takes up the story.
“Last night’s event with Steve Martin did not meet the standard of excellence that you have come to expect from 92nd St. Y,” Sol wrote in an e-mail to ticket holders. “We planned for a more comprehensive discussion and we, too, were disappointed with the evening. We will be mailing you a $50 certificate for each ticket you purchased to last night’s event. The gift certificate can be used toward future 92Y events, pending availability.” About 900 tickets to the event, which cost $50 each, had been sold; all ticket buyers received the offer. Perhaps the audience saw that message coming. Midway through the conversation, a Y representative handed Ms. Solomon a note asking her to talk more about Mr. Martin’s career and, implicitly, less about the art world, the subject of his latest novel, “An Object of Beauty.” According to Mr. Martin, viewers watching the interview by closed-circuit television from across the country sent e-mails to the Y complaining “that the evening was not going the way they wished, meaning we were discussing art.”

It was, he said, “a little like an actor responding in Act III to an audience’s texts to ‘shorten the soliloquies.’ ” The audience cheered when Ms. Solomon read aloud the note. Still, Ms. Solomon said she had thought until that moment that things were going swimmingly. She said she was “appalled” to have their conversation publicly criticized by the Y and found deserving of a refund.

My friend Scott said this to me in an email: "I was an usher in college at the 92nd St Y, so I can attest that many of the people there are philistines. It's a lot of cranky old biddies who buy a whole series of talks or movies or whatever. I was always surprised when they would have a movie and then a talk with the director or actor. A lot of them would come, watch the movie, and then leave. When they had The Color Of Money and then an interview with Martin Scorsese at least a quarter of the audience left after the movie. You can't stick around to see Marty? Stuff like that amazed me."

The public evidently only wanted to hear about Steve Martin's "wild and crazy guy" persona and his comic turns in the movies. This is the audience of the 92nd Street Y, one of New York's cultural beacons. Sheesh. I guess that's why Charlie Rose, David Letterman etc. have on so many actors and so few poets, artists etc. - that's what the public wants and that's what they're going to get.
Steve Martin responded to the kerfuffle with an editorial in the Times, here.

Perhaps he should have responded like this?
Posted by adrian mckinty at 8:10 AM