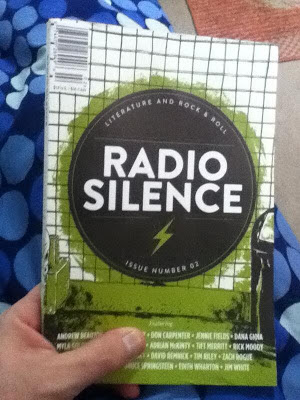 If you've read my Sean Duffy novels you'll know that, I, like Duffy, am a bit of a music obsessive. I like all kinds of music: classical, pop, rock, opera and my daughters have explained to me the differences between someone like Keisha (a hack) and Taylor Swift (apparently a rather good song writer). Last year an old friend of mine, Dan Stone, offered me the opportunity to write a piece for a new journal he was starting up called Radio Silence whose tag line is: Literature and Rock & Roll. In the inaugural Radio Silence I was very happy to do an essay on Van Morrison's Astral Weeks which I consider to be the best Irish pop album ever and one of the greatest albums of all time. I was also tickled to be sharing space in Radio Silence #1 with my old flat mate Alicia Stallings who was given a Macarthur 'Genius' grant in 2012 for her poetry and translations. Alicia wrote a lovely essay in RS#1 on her youth in Athens, Georgia when the scene around REM was starting to explode.
...
Radio Silence #1 evidently did well because Radio Silence #2 (that I got this week) is bigger, longer, more colourful and has a lot of heavy hitters inside: Bruce Springsteen, Robert Pinsky, David Remnick, Ray Bradbury et. al. I've written an essay for RS#2 on the Radiohead song "Creep" which begins thusly:

One of the late comedian Patrice O’Neal’s most watched videos on YouTube is a short radio interview he gave on KITS San Francisco where he hilariously dissects Radiohead’s song Creep and wonders about the strange power Creep seems to have over white men of a certain age. He speculates that it digs deep into the confusion and angst of Caucasian males in America, perhaps mining some rich seam of inadequacy, helplessness and loserdoom. For O’Neal, Creep and the movie Fight Club are the holy grails of contemporary American Whiteness. Black men, O’Neal says, don’t react to Creep or Fight Club in this strange obsessive way, but for young white males these two cultural touchstones describe perfectly what it is to be a man in an increasingly complicated, gender neutral, multi-ethnic world.

I first saw Radiohead play Creep in September 1992 at The Venue Club in Oxford on the same night that parts of the music video for the song were shot. I wasn’t that impressed with the group, who I hadn’t heard of before, and who seemed to be rather posh boarding school boys completely out of step with the times. As many of us saw it back it then real music, authentic music, was the blue collar stuff we were hearing from Seattle bands such as Nirvana who had triumphantly closed the Reading Festival a couple of weeks previously. Kurt Cobain and Thom Yorke came from different planets. Cobain was a homeless junkie who had lived under a bridge in Aberdeen, Washington, whereas it seemed that the worst thing that had ever happened to Yorke was a bad experience with the bleach bottle in the hairdressing salon...

You can read the rest and a lot of other great stuff in RS#2 available at all good book and magazine shops.
Posted by adrian mckinty at 10:00 AM