How My Novel Climbed 97,388 Amazon Places In A Single Morning 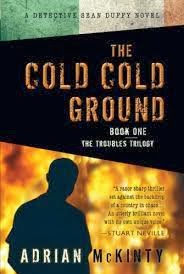 So how do you get your novel to climb 97,000 Amazon places in a single morning? The answer is that you get it mentioned on National Public Radio. NPR may not have a huge listenership compared to some commercial stations in the US but it's a listenership that buys books. On Friday last the great Nancy Pearl, "America's Librarian", went on Morning Edition to talk about some undiscovered literary gems from her personal library. The very first book she mentioned was The Cold Cold Ground. (You can listen to the entire story, here.) Nancy described it as "one of the best crime novels she had ever read" and the host of Morning Edition read out the first paragraph of the book. Within minutes TCCG began climbing on the Amazon rankings and by the end of the day it had cracked the famous Amazon 100. Now of course this was only a temporary blip and soon it had begun to fall back down again. But still it was nice to get a little glimpse of the dizzy heights of best sellerdom even if it was only for a brief period of time.
...
It was especially pleasing for me that this happened to The Cold Cold Ground, a book that I worked really hard on, was well received in the UK and Ireland, which won a couple of awards but which was utterly ignored in the American press because it didn't have a big publisher and a big ad campaign behind it. Apart from the honourable exception of The Arizona Republic I didn't get any newspaper reviews in the American papers (there was however a nice write up about me as an author in The Wall Street Journal). It shows you how difficult it is for a new or newish writer to break through if you don't have a marketing juggernaut behind you (or you don't live in Brooklyn). If a crime fiction reviewer is sharp enough or is well read enough to have heard of your book, chances are their editor will spike the review because the paper needs to appeal to a broad audience and the audience demands reviews of all the old favourites plus all the new Nordic Noir books. Classic Catch 22 then: you can't get reviewed because no one's heard of you and no one's ever going to hear about you because you can't get reviewed. So it's very nice to know that at least someone looks outside the box for the unconventional and the different. And to have that someone be the great Nancy Pearl is especially sweet.
...
If you want to look at my current fading amazon ranking or even buy the book itself you can do so, here. And thank you again NPR and the well read and wise Nancy Pearl! I enjoyed my moment in the sun.
Posted by adrian mckinty at 8:00 AM