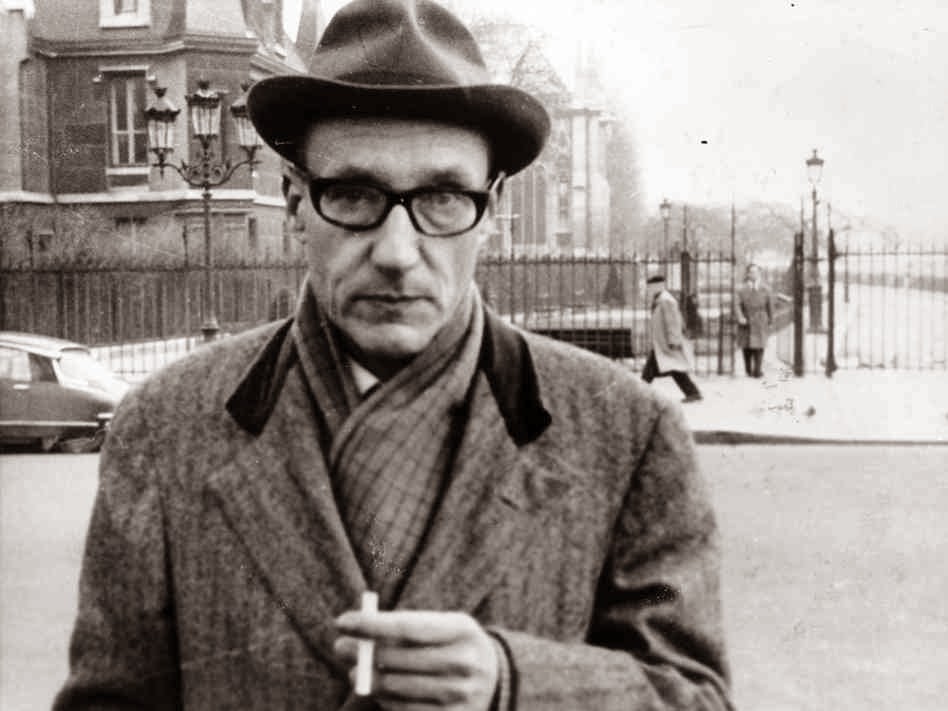 My review of William S Burroughs: A Life by Barry Miles in last weekend's Melbourne Age and Sydney Morning Herald. (See if you can spot the not 1, not 2 but 3 obiter dicta sarky remarks about Bono)
...

William Burroughs would have been 100 this year. Not that it ever seemed likely that Burroughs would reach a century. From his early 20s onward he began regularly taking heroin, cocaine, methadone, tobacco, amphetamines and marijuana. When he couldn't get proper drugs, like the hero of his most famous novel, The Naked Lunch, he injected himself with bug spray, sniffed household solvents and drank rubbing alcohol.
You'd think that Burroughs was escaping an unhappy childhood but in fact he was born into a wealthy St Louis family in 1914, in a house with three black servants, an Irish cook and a Welsh nanny. The latter two apparently filled the young boy's head with such convincing tales of the supernatural that he believed them all his life.
Heirs to the Burroughs Adding Machine fortune, the family comfortably survived the Wall Street Crash and sent young Bill to the Los Alamos Ranch School, New Mexico, the most expensive boarding establishment in America. Harvard followed and a grand tour of Europe before Burroughs fell in with Jack Kerouac, Allen Ginsberg and later Neal Cassady in New York. All four of them wanted to be writers and when Kerouac was published first their circle became known as the ''Beat Generation'', influenced as much by jazz rhythms as by classic literature. Bisexual, hedonistic, low-rent and self-important, the Beats broke the mould of what it meant to be an American writer in the 1950s. Authenticity was the great thing: you wrote about drugs and sex and your feelings, not about corporation shills in ties being unfaithful to their Betty Draper wives in the identikit suburbs.
All of Burroughs' early literary experiments, however, failed miserably and he moved to Mexico where there was easy access to heroin and boys. One drunken night in Mexico City while attempting to demonstrate his marksmanship, he shot and killed his surprisingly tolerant wife, Joan Vollmer. The Burroughs family hired expensive lawyers and Bill was released after less than two weeks in jail, with a sentence of probation and a few churlish complaints about the cold prison beds.
He moved to New York and then to Tangier and began to write in earnest, as an attempt to exorcise the ''Ugly Spirit'' that he said had forced him to kill Joan. Junkie was published in a paperback edition that sold 150,000 copies. The Naked Lunch followed soon thereafter and, like James Joyce's Ulysses, had the great luck to be condemned by the United States Post Office as obscene, thus assuring its place in the counterculture.
Barry Miles, drawing on the previous research of James Grauerholz and his own 30-year friendship with Burroughs, has produced an encyclopaedic and staggeringly well-researched book. In William S. Burroughs: A Life we discover Bill in his Scientology phase attempting surreptitiously to tape record L. Ron Hubbard. Paul McCartney shows up to write Eleanor Rigby in Burroughs' basement. Bill is there when a drunken Kerouac is famously destroyed on American television by William F. Buckley. And in the funniest episode in the book, Burroughs and Allen Ginsberg visit a paranoid Louis-Ferdinand Celine, who assures them his snarling attack dogs are trained only to go after the postman.
Throughout the '60s and '70s the Burroughs cult grows. He appears next to Marilyn Monroe on the cover of The Beatles' Sgt Pepper album and on a 1981 episode of Saturday Night Live, supermodel Lauren Hutton introduces him as the ''greatest living writer in America''.
Burroughs writes, paints, acts in movies and becomes very famous indeed. Once the hippest guy in the room, Burroughs in his later years, however, becomes something of a bore, playing with guns and babbling about magic and the occult. His reading material consists of the magazines Gun World, Gun Tests, Gun Digest, UFO Universe and Soldier of Fortune. He becomes a cuddly ''national treasure'' and does ads for Nike. He suffers fools gladly and the usual parade of sycophants and groupies make the pilgrimage to his dreary Kansas compound. One morning it's Michael Stipe standing there holding the milk, the next Bono's cuban heels come click-clacking down the drive. Bono becomes a repeat offender house-guest, which almost makes you believe in karma.
Burroughs finally dies of a heart attack in 1997, four months after Allen Ginsberg, 30 years after Kerouac and Cassady. Barry Miles thoroughly documents all of this; perhaps even a little too thoroughly, for there are only so many houses, hotels, boyfriends, liaisons, orgies, drugs, drug cures, cults, cult cures, favourite guns, least favourite guns, that the reader can handle before becoming a little overwhelmed. But in lieu of a shorter, deeper, more pointed book, Burroughs: A Life will almost certainly remain the definitive biography for many years to come.