Ireland Is A Railway Poster - Philip Larkin in Carrickfergus 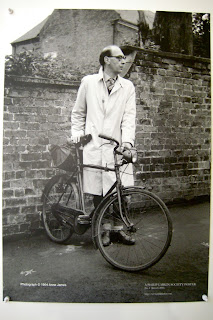 Every year in and around Philip Larkin's birthday I like to reblog my favourite poem of all time, Larkin's Aubade...So below, you'll find Aubade and a little post from last year on my discovery in Larkin's Collected Letters, that Larkin had paid a secret visit to my hometown, Carrickfergus...
...
Aubade
BY PHILIP LARKIN
I work all day, and get half-drunk at night.
Waking at four to soundless dark, I stare.
In time the curtain-edges will grow light.
Till then I see what’s really always there:
Unresting death, a whole day nearer now,
Making all thought impossible but how
And where and when I shall myself die.
Arid interrogation: yet the dread
Of dying, and being dead,
Flashes afresh to hold and horrify.

The mind blanks at the glare. Not in remorse
—The good not done, the love not given, time
Torn off unused—nor wretchedly because
An only life can take so long to climb
Clear of its wrong beginnings, and may never;
But at the total emptiness for ever,
The sure extinction that we travel to
And shall be lost in always. Not to be here,
Not to be anywhere,
And soon; nothing more terrible, nothing more true.

This is a special way of being afraid
No trick dispels. Religion used to try,
That vast moth-eaten musical brocade
Created to pretend we never die,
And specious stuff that says No rational being
Can fear a thing it will not feel, not seeing
That this is what we fear—no sight, no sound,
No touch or taste or smell, nothing to think with,
Nothing to love or link with,
The anaesthetic from which none come round.

And so it stays just on the edge of vision,
A small unfocused blur, a standing chill
That slows each impulse down to indecision.
Most things may never happen: this one will,
And realisation of it rages out
In furnace-fear when we are caught without
People or drink. Courage is no good:
It means not scaring others. Being brave
Lets no one off the grave.
Death is no different whined at than withstood.

Slowly light strengthens, and the room takes shape.
It stands plain as a wardrobe, what we know,
Have always known, know that we can’t escape,
Yet can’t accept. One side will have to go.
Meanwhile telephones crouch, getting ready to ring
In locked-up offices, and all the uncaring
Intricate rented world begins to rouse.
The sky is white as clay, with no sun.
Work has to be done.
Postmen like doctors go from house to house.
....
....
....
For years I've been single handedly peddling the concept that my hometown, Carrickfergus, is the centre of the universe, with admittedly, limited success. What I particularly like are the literary connections which are surprisingly rich in so small a place. Famously Louis MacNeice lived in Carrickfergus and wrote about it more than once. He brought WH Auden to the town to stay with him but what he thought is not recorded. Jonathan Swift lived in Carrickfergus (at Kilroot) where he wrote A Tale of a Tub (and possibly plotted Gulliver). Anthony Trollope lived in Whiteabbey near Carrickfergus where he wrote The Warden. William Congreve lived in Carrickfergus as a boy. Charlotte Riddel - best selling Victorian pot boiler novelist - was from Carrick. William Orr, United Irishman and poet, (with a famous poet brother) lived and was, er, hanged in Carrickfergus. Currently the best selling science fiction writer Ian McDonald lives not a million miles away from Carrick, science fiction writer David Logan lives in Carrickfergus and for his sins Carrick is the first thing Colin Bateman sees from his chateau when his butler opens the curtain windows every morning. Several episodes of Game of Thrones have been shot at Red Hall in Carrickfergus (but none yet at Carrick castle which is a bit odd as its the best preserved castle in all of Ireland!) My favourite Irish female poet, Sinead Morrissey, lives just up the road from Carrickfergus at Jordanstown. And speaking of poets I've just found this letter (below) from Philip Larkin to Monica Jones talking about his lonely visit to Carrick in 1950 when - who knows - he could have seen my mum and dad out for a walk around the harbour. Larkin is on fine miserable form thoughout... 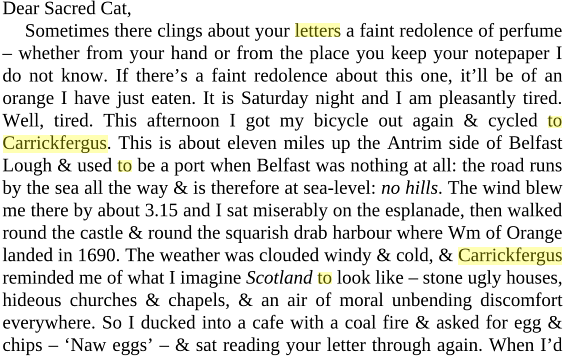