Gun Street Girl - The First Review & How To Win A Proof 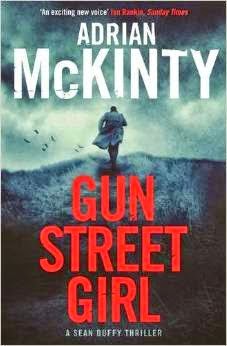 Jon Page, from Bite the Book, got himself a VERY early galley of Gun Street Girl. He read the galley and reviewed it over on his excellent site, here. I've worked on the book quite a bit since this first draft, tightening the story a little and adding a few more jokes. (In fact I'm still working on the book now.)
...
The novel of course takes place in Ulster but the wider net of the narrative brings in the biggest American political scandal of the Reagan administration, a famous cause celebre from 1980's Oxford and the chaotic weeks in Belfast that followed the signing of the Anglo Irish Agreement in 1985. The book begins with an echo of and on the same night that Rorshach's journal begins in Alan Moore's Watchmen, which also has one or two sneaky resonances throughout the text. Anyway, old chums, this is what Jon Page thought:
...
Sometimes a recurring crime character is brought back and the story feels forced or the attempt feels lame. But then there are those rare times when, despite the series being over, the character comes back and exceeds what has been done before. And that is exactly what Adrian McKinty has done with Sean Duffy. 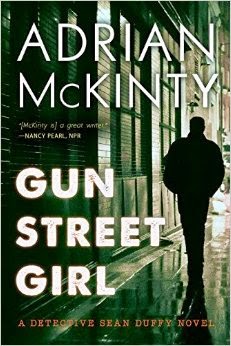 In the last Sean Duffy book, In The Morning I’ll Be Gone, it appeared the series had finished with a bang. Adrian McKinty had flagged his intention to halt the Duffy books at three and had given us a more than satisfactory conclusion. Better to finish wanting more than for a fantastic character to get stale. However an idea came to McKinty for a book four, but he still resisted until he literally dreamt how he could end that book, and that was what he needed to begin writing book four in the Sean Duffy series. He wrote about that experience, here. And yes, the ending really is one of the best things McKinty has done.

Not only has McKinty done justice to the previous books with Gun Street Girl but I think he has actually exceeded himself. The Sean Duffy trilogy was already something special and Gun Street Girl not only reaffirms that but makes it even better. The year is 1985 and The Troubles are still in full, nasty swing in Belfast with the flames about to be fanned by the so-called Irish-Anglo Agreement. Sean Duffy is now an Inspector in charge of CID at Carrick RUC. When a local bookie and his wife are killed in what looks like a professional hit Duffy only takes a passing interest in the case letting his detective sergeant take the lead and blood two new detectives. However when the case takes a nasty turn Duffy dives in up to his neck of course ruffling any (and all) feathers that get in his way. Conspiracies loom and the bodies start piling up as Duffy quickly uncovers a sinister plot well above his pay grade. But to crack this case he’s going to need someone to talk and the first thing they teach you in Northern Ireland is to never talk, especially to the RUC, even when you’re supposed to be on the same side.

Full of McKinty’s trademark wickedly black humour and with the usual taut plotting this just may be the best book in an exceptional series so far. Sean Duffy has come a long way from The Cold Cold Ground and everything he's been through is starting to leave scars. I was reluctantly happy to see the series finish after three books but after book 4 I think there is even a little more life in this awesome series to come. At least I hope so!
...
Still reading all the way down here? Good for you. Serpents Tail are having a competition whereby they are giving away some early galleys of Gun Street Girl. If you click this link you'll be taken to the competition page. Alas this compo is open only to British and Irish readers (because of postage costs).
...
You can, of course, read the first five chapters of Gun Street Girl, for free, here...