The End Of Theocracy In Ireland 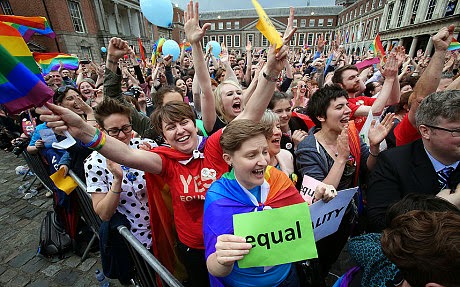 "yes and his heart was going like mad and yes I said yes I will Yes."
--Molly Bloom

The triumph of the "yes" vote in Friday's gay marriage referendum in Ireland is another nail in the coffin of the power of the church in Ireland. The Catholic Church vehemently urged its parishioners to vote "no" to gay marriage but the parishioners didn't listen and the yes vote won by a comfortable margin. Ireland is the only country in the world where gay marriage has become law by a popular vote in a plebiscite rather than by a vote from parliamentarians or a diktat imposed by a Supreme Court.

The Catholic church's power has been waning in the Republic of Ireland for decades. The 1937 Constitution of Eire brought in by Eamon De Valera in consultation with the fundamentalist Archbishop John Charles McQuaid is a remarkably sectarian document that begins thusly:

In the Name of the Most Holy Trinity, from Whom is all authority and to Whom, as our final end, all actions both of men and States must be referred We, the people of Éire, Humbly acknowledging all our obligations to our Divine Lord, Jesus Christ, Who sustained our fathers through centuries of trial.

No "We hold these truths to be self evident" or "We the people"; nope in Ireland the laws come direct from heaven and heaven's administrators are the Catholic Church. The Catholic Church was given control of the schools and many aspects of life in the Republic. Drunk with power the church spent the next five decades abusing altar boys, raping kids, beating boys and girls, sending unmarried mothers to work as slaves in laundries etc. etc. etc. In the 1990s two things began to happen. First, the Celtic Tiger economy allowed many young Irish people to stay at home and work rather than emigrate. Second, an emboldened Irish media began to report on negative stories about the church. With the dissenters staying home rather than leaving and with scandal after scandal finally making the papers a tide of revulsion against the theocrats began. Once the floodgates opened and the Catholic Church began obfuscating and lying about the decades of abuse heaped upon children in its care the sensible people of the Irish Republic turned their back on what Christopher Hitchens called a "creepy cult of professional virgins." The gay marriage referendum is a sign of how far the Church's status has fallen. The church desperately wanted a no vote - the people voted yes. The next thing the Irish will have to do by plebiscite is change their - still - extremely restrictive law on abortion that regularly kills women (!) but, you know, one step at a time...Also it cannot be forgotten that the Catholic church controls education in the Irish Republic and in half the schools in Northern Ireland, but again one step at a time...
... 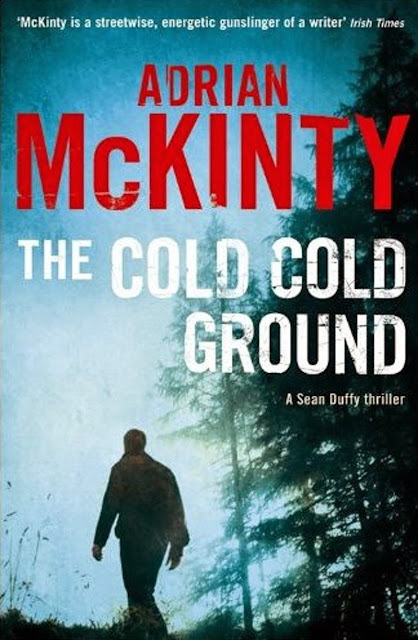 In Northern Ireland things, however, are still pretty damn terrible if, like me, you believe in the sensible libertarianism of John Stuart Mill. Abortion is illegal in Ulster (the only place in the UK where this is the case), racism is still endemic in parts of Belfast and gay marriage is a long way off. Indeed Northern Ireland is now the only part of the UK or Ireland where gay marriage is not permitted. Northern Ireland is roughly 50:50 Protestant/Catholic; northern Catholics appear to be only slightly more conservative than their fellows down south but it's the unionists particularly the DUP who have blocked gay marriage in the Northern Ireland Assembly. Prominent members of the DUP would like to see creationism taught in schools as part of the science curriculum and many of their elected representatives believe that the Bible is literally true and that the scientific consensus on man made global warming is some kind of global conspiracy. Sheesh. The north still has some catching up to do if it wants to enter the twenty first century. Yes, you can attempt to impose a liberal morality on a reluctant population (Brown v Board of Education is an example where this has worked) and in Ulster the recent gay cake saga has attempted to do a similar thing, but its much better if the morality comes from the bottom up. (I agree with Simon Jenkins on this one)
...
I wonder what would happen if a referendum on gay marriage were held in Northern Ireland? I think the politicians on all sides might be surprised by the results. There is some evidence that in the quiet privacy of the ballot booth the people might vote yes despite the Biblical rantings and ravings of their elected representatives. The population of Ireland is getting younger and young people have no truck with this kind of nonsense. The theocrats and Biblical literalists are on their way out. Plug Alert. You only have to read my, ahem, award winning novel, The Cold Cold Ground, set in the nightmare year of 1981 when homosexuality was punishable by 3 years imprisonment to see how far we have come since then.
...
Ireland is marching into the future and there's not much the people in silly hats (mitre, bowler or beret) can do to stop it.
Posted by adrian mckinty at 10:00 AM