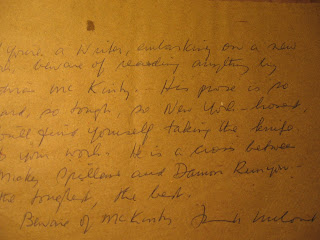 (a blogpost from way back in 2009)
....
In March 2004 I had just published a novel called Dead I Well May Be to a great chorus of indifference. Although the book had gotten good reviews in the trades it was ignored (i.e. not reviewed at all) by The New York Times, The Boston Globe, Entertainment Weekly etc. I was an Irish guy living in Denver and I had written a crime novel about pre Giuliani New York - the incongruities were probably too much for most reviewers to cope with, especially when their job was (and is) to cover the big names. Anyway Dead came out and more or less died. Simon and Schuster weren't interested in publishing anything else by me and I went back to teaching high school, figuring that maybe I'd try my hand again at this writing lark a few years down the line. It was a snowy Colorado day in March 2004 (let's for the sake of the story pretend it was St Patrick's Day) and I was doing class prep and probably feeling a bit depressed about the whole rotten writing business when I got an email from Sarah Knight at Scribner who told me that Frank McCourt had somehow read Dead I Well May Be and not only liked it but had written the following blurb:


If you're a writer embarking on a new work beware of reading anything by Adrian McKinty. His prose is so hard, so tough, so New York honest you'll find yourself taking a knife to your work. He is a cross between Mickey Spillane and Damon Runyon - the toughest, the best.
After the blurb got attached to the book funny things started to happen. Simon and Schuster announced that they were going to bring out a paperback edition and wanted to know if I had any other books up my sleeve. Then I got an English publisher, Serpent's Tail. Then I got a French publisher, Gallimard. I even got a Russian publisher. The book was optioned (briefly, but even so) by Universal Pictures and in the autumn of 2004 it was short-listed for a Dagger Award.
...
Frank McCourt passed away on Sunday and I'm not saying that I owe my entire career (such as it is) to him, but I do think he gave me an adrenalin shot to the heart when I was flatlining. The blurb was unsolicited and completely out of the blue, McCourt merely wanted to help out a young writer, just as he helped out his friends, colleagues, and especially students for 50 years in New York City. RIP Francis, I owe you and I'll miss you.
...
Incidentally the blurb came to Simon and Schuster's offices in long hand and apparently was written on one of McCourt's old grocery bags. They had to call him up and ask if he'd really sent it. He said he had. I asked them if I could have the grocery bag with the blurb on it and they sent it to me.
...
It's currently on eBay priced at a very reasonable 75.00 dollars. (Kidding!)
Posted by adrian mckinty at 6:41 AM