Police At The Station And They Don't Look Friendly 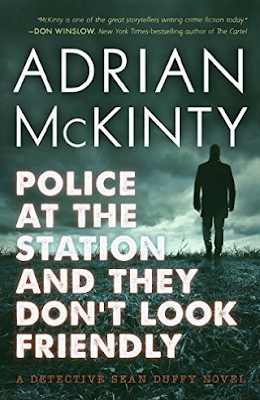 7th Street Books
Daneet Steffens
If newly-diagnosed asthma, fatherhood to six-month-old Emma, and mostly-happy domesticity with his girlfriend, Beth, has softened a few of Detective Inspector Sean Duffy’s edges, it hasn’t dulled his keen survival instinct or determined pursuit of dastardly criminals in the slightest. (That said, those two qualities are often in direct conflict with each other when it comes to Duffy.) In Adrian McKinty’s “Police at the Station and They Don’t Look Friendly,’’ when challenged by a medical test, Duffy actually cuts down on his cigarettes-and-vodka-gimlet intake, but rest assured that nothing could ever cut down his curiosity-driven investigative work. There’ve been no murders in Carrickfergus in nearly a year, so when someone appears to be using drug dealers as targets for their crossbow practice, Duffy and his trusted colleagues, super brainy Detective Constable Lawson and semi-gentleman farmer Detective Sergeant McCrabban, jump on the case (two excellent sidekicks). But they are working in 1988’s Northern Ireland, a country mired in the violence of The Troubles: Are these new attacks the work of the Direct Action Against Drug Dealers group, or are they politically motivated?

McKinty imbues his writing with same level of attention to wit and cultural touchstones as the scrupulous care he takes structuring the police-procedural aspects of the novel. In the first chapter alone, there are references to philosopher Gaston Bachelard, Ireland’s once all-encompassing Holocene forest, “The Wicker Man,” and Irish artist Jim Fitzpatrick, creator of the iconic Che Guevara portrait; elsewhere we learn of Duffy’s favorite musical accompaniments to life (he’s partial to Arvo Pärt, can’t stand Kylie Minogue, and considers Ella Fitzgerald, Schubert and Mozart comfort music).

All this, plus we get to observe the normally flying-by-the-seat-of-his-pants detective grappling intentionally with his future. Another terrific book from the underrated McKinty.
Posted by adrian mckinty at 10:00 AM