Darryl Jones Sleeping With The Lights On

my review of the new Darryl Jones book Sleeping With The Lights On from last week's Weekend
Australian:


Sleeping With The Lights On, The Unsettling Story of Horror

The scariest film I’ve ever seen was Ben Wheatley’s Kill List (2011). In truth it’s not that terrifying but what put the willies up me was sitting down to watch what I thought was one of kind of flick (a thriller) and then about two thirds of through being plunged into a graphic occult horror movie with a brilliantly, sickening ending. After watching Kill List I found myself worried that my back door didn’t lock properly and I slept with an axe under my bed for the next week.
That’s the difference between horror and other genres. Horror works on the deep recesses of your mind. Horror turns on switches that kept our ancestors alive long enough to procreate and pass their genes onto us. Flight or fight is something even an amoeba seems to understand. 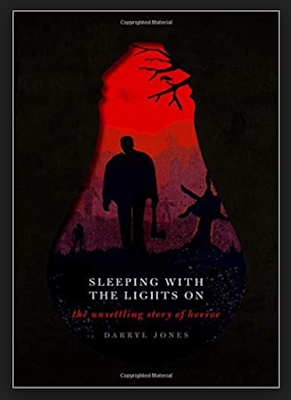 Darryl Jones’s Sleeping With The Lights On – The Unsettling Story of Horror is a nice primer and guide to the history of horror fiction in literature and film. At 181 pages it’s not going to be terribly comprehensive and those looking for, say, Neil Gaiman or James Herbert in the index are going to be disappointed. This is not to knock the book, Jones isn’t writing an encyclopedia, he’s attempting to give us a breezy summary of the genre from the Epic of Gilgamesh and Greek tragedy all the way up to Get Out (2017). In this he largely succeeds.
With so much material at his disposal, Jones, a professor of English at Trinity College Dublin, must find some grand organizing principle. He has decided to split his book into five sections: monsters; the occult and supernatural; horror and the body; horror and the mind; science and horror.
Monsters is a lively section taking us first through cannibals then early vampires, classic vampires and finally annoying teen vampires. Jones is particularly good on how Bram Stoker, Anne Rice and Stephen King use the vampire idea for very different ends. Twilight I suppose needs some cultural unpacking but I wished there had been space too for my favourite vampire film the bleakly creepy, Swedish classic Let The Right One In. The monsters section concludes with zombies and rightly there is a lengthy analysis of George Romero’s Dawn of the Dead “somewhere between a Swiftian satire and a Frankfurt School treatise”.
The occult section begins with Max Weber’s “disenchanted world” and covers ghosts, The Exorcist and The Blair Witch Project in a chapter that zips along a bit too quickly for me. Horror and the body is primarily about werewolves and there’s a wonderful bit on Angela Carter whose genius is sadly overlooked these days. David Naughton’s transformation to wolf is rightly praised in An American Werewolf in London and this brings Jones somewhat obliquely to torture porn. Jones finds a paragraph to talk about The Human Centipede but, amazingly, not here or anywhere in the book do we get a mention of Alien one of the best and most influential horror/science fiction films of the last fifty years.
Horror and the mind brings us to Lovecraft, Poe and good sections on doppelgängers, madness and serial killers. Lovecraft’s prose drives Jones to distraction although he has nice things to say about Poe, Roald Dahl and Robert Louis Stevenson.
The science and horror chapter covers Mary Shelly’s Frankenstein in its many incarnations and this leads Jones rather nicely into one of his best sections on technophobia in books and movies. We race through all those radioactive giant insect films of the fifties and sixties, get a few paragraphs on the masterpiece that is The Day The Earth Stood Still and get an extended look at James Cameron’s brilliant The Terminator and Terminator 2. For some reason this is the place where Professor Jones also looks at comic books though they seem a bit shoved in at the end of a chapter.
A concise Afterword takes us all the way up to the beginning of 2017. The print deadline allowed Jones to wax lyrical about Get Out and its obvious Stepford antecedents but alas Guillermo del Toro’s maritime monster movie masterpiece The Shape of Water did not make the cut.
This is a good little book and it will delight someone who is new to all this but hardcore fans will probably find themselves, like poor doomed David Naughton seeking meatier fare.

Posted by adrian mckinty at 9:13 AM