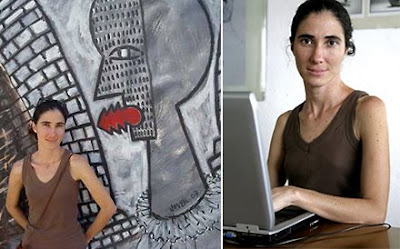 I got an email last week from Yoani Sanchez who blogs about her life in Cuba. Yoani tells it like it is and on at least two occasions she's been threatened with prison by the Castro brothers, but thanks to an outcry from Spanish and Latin American bloggers the threats have been lifted. Yoani's blog isn't all politics - she talks about books, music and the craic in and around in Havana. The President of Russia is in her home town this week, being dragged around Cuban Potemkin villages by the score. He could do worse than meet Yoani and get a tour of the real Habana that foreign visitors don't normally get to see. Time Magazine picked Yoani as one of its 100 Heroes and Pioneers and I can't but agree. The worst that can happen to me on my blog is that someone will ask me to remove a YouTube link or some wee shite will comment that he hates my books, Yoani could actually end up in a plantation gulag for what she writes. More power to her. To read the English translation of her blog Generation Y, click here.
Posted by adrian mckinty at 6:39 PM