Chick Lit We Can All Embrace 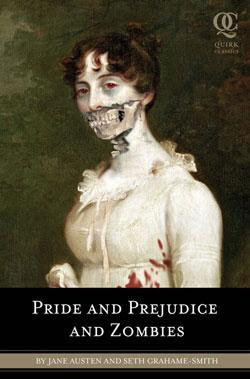 This falls under the category "Damn, I wish I'd thought of that!" A chick lit novel that is made of awesome: Pride and Prejudice and Zombies by Jane Austen and Seth Grahame-Smith. This is from the press release:

Pride and Prejudice and Zombies features the original text of Jane Austen’s beloved novel with all-new scenes of bone-crunching zombie action. As our story opens, a mysterious plague has fallen upon the quiet English village of Meryton—and the dead are returning to life! Feisty heroine Elizabeth Bennet is determined to wipe out the zombie menace, but she’s soon distracted by the arrival of the haughty and arrogant Mr. Darcy. What ensues is a delightful comedy of manners with plenty of civilized sparring between the two young lovers—and even more violent sparring on the blood-soaked battlefield as Elizabeth wages war against hordes of flesh-eating undead. Complete with 20 illustrations in the style of C. E. Brock (the original illustrator of Pride and Prejudice)

Hat tip to Andrew Sullivan for finding me my beach book this year.

Posted by adrian mckinty at 8:01 AM