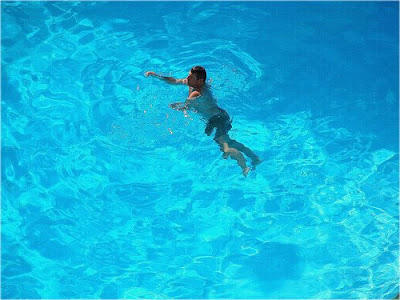 The last time I stayed at our friend's Clare's cabin in northern Victoria I called my post Cherish The Cabin which was a reference to the Seinfeld episode The Cheever Letters in which Kramer burns down Susan's parents' cabin. We stayed there this weekened and coincidentally I found a copy of the collected stories of John Cheever, and so with kangaroos jumping into the sheep field in front of the house I settled down on the porch to read 'The Swimmer'. How I haven't managed to read John Cheever's 'The Swimmer' in 40 years on planet Earth is an easily solved mystery: I didn't go to an American high school. From the amount of web criticism, book notes, analysis and even ready made high school and college essays (for sale) I might be the only US passport holder not to have read 'The Swimmer'. It's the story of Neddy Merrill who one day decides to swim his way home across suburban Westchester County's swimming pools. Initially Neddy's optimistic adventure is the standard's hero's journey but as the narrative progresses it becomes darker and more surreal until we finally see that Neddy's life is a sham, and his arrival home isn't to a cheering family but rather to a barred and empty house. It's a classic New Yorker story of the 60's and has everything the New Yorker liked back then: spoiled rich people in the suburbs getting drunk and gradually realising the pointlessness of their lives. It's an allegory of course and we are supposed to lose sympathy with Neddy as we find out that he has failed in business and left an angry mistress in his wake. As if in the grip of special relativity, external time for Neddy seems to advance rather quickly but I also like the interpretation that he is supposed to be dead or dying and these swimming pools are his own personal river Styx. Is this where we go when we die? To a place where our brief lives are revealed to be hollow and meaningless - a pointless series of events that have no ultimate end? 'The Swimmer' is a very good story, but as Roger Ebert explained 40 years ago in his analysis of the movie version of The Swimmer "[i]t's the sort of allegory the New Yorker favors. Like assorted characters by John Updike and J.D. Salinger, Cheever's swimmer is a tragic hero disguised as an upper-class suburbanite. There are a lot of tragic heroes hidden in suburbia, I guess, perhaps because so many of them subscribe to the New Yorker." It actually reminded me of the TV show Mad Men where button-down ad-man Don Draper also lives in a wealthy, drink sozzled, Westchester suburb of the early 1960's surrounded by wives and colleagues in the throws of quiet desperation. Draper too is a fraud whose affairs, expensive Scotch and workaholism do nothing to keep the existential demons at bay.
...
Wikipedia has a solid take on 'The Swimmer' here and there's a nice look at the Burt Lancaster film version here. You can buy your ready made essay cheat from these guys here. By the way for anyone still seeking the answer to that question where do we go when we die? here's the answer: into the bellies of worms, boys, into the bellies of worms.
Posted by adrian mckinty at 6:59 PM