A Tizzy in Tazzy 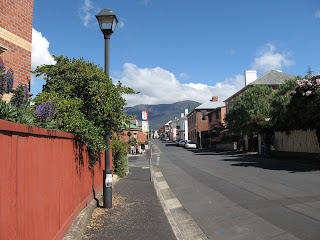 I just spent a pleasant 48 hours in Hobart, the capital and largest city of Tasmania. It's a small place with a charming boat-filled harbour, at least 9 bookshops, a dozen good fish restaurants and a few decent pubs, all of which, though, close at 11pm. (Last night I had to go to a rather seedy casino to get an after hours drink.) Hobart is like a cross between Inverness and Wellington, New Zealand, though not quite as happening as either Wellington or Inverness which may surprise residents of those relatively sleepy places. I liked it a lot though as I like most port cities. And the harbour isn't just a marina but has real ship 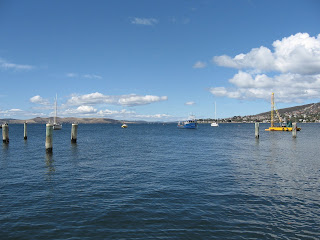 s in there including a Russian icebreaker, a French Antarctic research vessel and the Sea Shepherd cutter Steve Irwin. I didn't really know much about the Sea Shepherds before coming here but apparently they are an organisation militantly opposed to whaling - an aquatic version of the Animal Liberation Front, seemingly more violent than either Greenpeace or Friends of the Earth. A crewman proudly talked about the number of boats they had sunk or otherwise put out of action which rubbed me completely the wrong way as did their version of the skull and crossbones disturbingly flying from the prow and main deck. (I'm from a naval family, so perhaps I'm a little too sensitive about 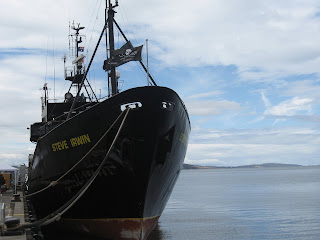 this.) Anyway, the Steve Irwin was an interesting vessel and their hearts are definitely in the right place if not their piratical tactics.
...
On a happier subject I walked south out of Hobart to the town of Taroona where Tazzy's very own royal (on nearly as many Aussie gossip mags as Nicole Kidman or Katie Holmes) - Princess Mary of Denmark was born and raised. It was a nice little walk to Taroona and got the blood flowing, though it poured mercilessly on me the entire trip back to Hobart. On my return, for professional reasons, I checked out the bookstores, used and new and got a great Peter Matthiessen travel book about Africa and a Graham Greene biography. Locally though, the brilliant Richard Flanagan and knitting books seem to be whats popular.
... 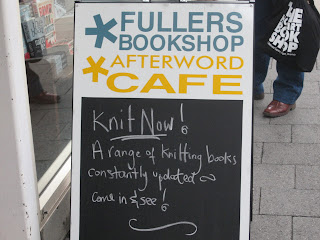 But this isn't a NY Times 36 hours in Phoenix feature. I didn't really do a serious investigation, just wandered and pretty much did my own thing. I was surprised to find a good Cambodian restaurant where I had lunch and an even better Iranian place where I had dinner. I also ate at a curry house frequented by the Indian cricket team, which was ok and at a floating fish and chip barge which was delicious. The Tasmanians are a laconic, self depreciating and funny lot and the Belgian-Flemish couple I met up with and went searching for a late night watering hole with were also pretty funny too (and brave to the point of foolhardiness if half of their What We Smuggled Into Beijing story is true).
Posted by adrian mckinty at 9:01 AM