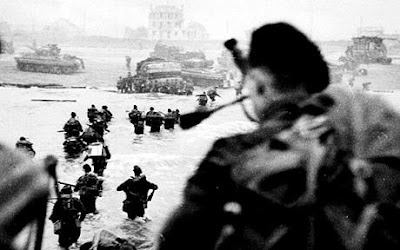 One of the strangest moments in the film The Longest Day (1962) was when piper Bill Millin landed on Sword Beach on D Day and immediately began playing Hieland Laddie under heavy machine gun and artillery fire. This must be a Hollywood invention, I remember thinking, when I saw the film as a skeptical 10 year old sometime in the 70's, but of course it wasn't. This from today's obituary in The Daily Telegraph:

Once ashore Millin did not run, but walked up and down the beach, blasting out a series of tunes. After Hieland Laddie, Lovat, the commander of 1st Special Service Brigade (1 SSB), raised his voice above the crackle of gunfire and the crump of mortar, and asked for another. Millin strode up and down the water’s edge playing The Road to the Isles. His worst moments were when he was among the wounded. They wanted medical help and were shocked to see this figure strolling up and down playing the bagpipes. To feel so helpless, Millin said afterwards, was horrifying. For many other soldiers, however, the piper provided a unique boost to morale. “I shall never forget hearing the skirl of Bill Millin’s pipes,” said one, Tom Duncan, many years later. “It is hard to describe the impact it had. It gave us a great lift and increased our determination. As well as the pride we felt, it reminded us of home and why we were there fighting for our lives and those of our loved ones.”

When the brigade moved off, Millin was with the group that attacked the rear of Ouistreham. After the capture of the town, he went with Lovat towards Bénouville, piping along the road. They were very exposed, and were shot at by snipers from across the canal. Millin stopped playing. Everyone threw themselves flat on the ground — apart from Lovat, who went down on one knee. When one of the snipers scrambled down a tree and dived into a cornfield, Lovat stalked him and shot him. He then sent two men into the corn to look for him and they came back with the corpse. “Right, Piper,” said Lovat, “start the pipes again.”

At Bénouville, where they again came under fire, the CO of 6 Commando asked Millin to play them down the main street. He suggested that Millin should run, but the piper insisted on walking and, as he played Blue Bonnets Over the Border, the commandos followed. When they came to the crossing which later became known as Pegasus Bridge, troops on the other side signalled frantically that it was under sniper fire. Lovat ordered Millin to shoulder his bagpipes and play the commandos over. “It seemed like a very long bridge,” Millin said afterwards. The pipes were damaged by shrapnel later that day, but remained playable. Millin was surprised not to have been shot, and he mentioned this to some Germans who had been taken prisoner. They said that they had not shot at him because they thought he had gone off his head.