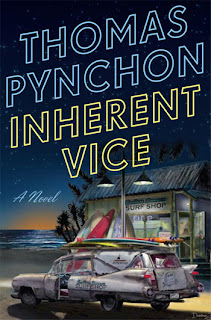 In the early 1970's James Ellroy, Thomas Pynchon and Philip K Dick were all living within a few miles of each other in Greater Los Angeles. Ellroy was a 23 year old kid beginning his first experiments with writing, Pynchon was 34 and editing the book which would become Gravity's Rainbow and Dick at 42 was reaching his peak as a novelist, having the experiences and working on the book which would become A Scanner Darkly. There must have been something about that time and place because - joining Scanner - we've now gotten Pynchon's version of events in Inherent Vice and Ellroy's take in Blood's A Rover and they all seem to share certain thematic unities: pandemic drug use, paranoia, corrupt LAPD officers, belief in government conspiracies, supreme disillusionment with politics, and, in the case of Ellroy and Pynchon, an odd obsession with Las Vegas and Howard Hughes. The overriding impression you get from these novels is that America as an ideal has reached a dead end here at the edge of the continent among the wastrels, drug dealers, dreamers and movie stars. And it might even go deeper than that - not only has America failed, but the whole enlightenment project has failed. The modern world is fundamentally broken and cannot be fixed; democracy has no future - you either have total license or total tyranny and the proponents of these extremes are shrill and crazy.
...
But that just may be Los Angeles. Don't get me wrong, I like LA. Fat Burger and Santa Monica and Malibu Creek are worth the drive, but I don't think you could have written Rover, Scanner or Vice in New England where people are not known for their demonstrative or hyperbolic nature. William Faulkner tells a story about how he was driving in Maine once and asked for directions. "Can you get to X, from here?" Faulkner wondered. "Yes." a local farmer responded. "Thanks," Faulkner said and off he drove before finding that the road he was on ended in the middle of nowhere. He drove back and encountered the farmer again. "I thought you said I could get to X from here," he wondered. "Not on this road," the farmer told him. Faulkner claims that he was impressed by the Mainer's precise answer to his question. In Mississippi they would have gone out of their way to show you the right road, but that was unnecessarily verbose in Maine.
...
I have to say, although Faulkner was subtly dissing the north east, I really like it up there: people keep to themselves, they're suspicious of authority and innovation and they don't fall easily for the latest trends. Perhaps in the Los Angeles of 1971 America's future seemed bleak - as it does today - but drive up to New Hampshire or Vermont or Maine (and many other places in the heartland I'll bet) and you'll see a landscape and culture unchanged in nearly four centuries and a hardy, skeptical people who are not afraid of the future and who can handle just about anything.
...
(Except maybe the terrible circumstances of another novel I read recently - Cormac McCarthy's The Road. )
Posted by adrian mckinty at 10:07 AM