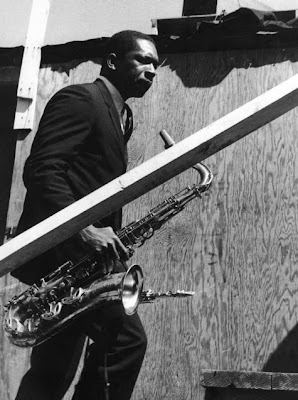 The man next door to me has taken up the saxophone.* Is there a more terrifying sentence in the English language? I don't think so and perhaps soon you'll see my name in the papers on an attempted murder rap. Coltrane (right) he ain't. Hell he ain't even Lisa Simpson. He has begun learning the scale and he always manages to miss the penultimate note with such persistent genius that I expect soon they'll recruit him for the CIA dungeons in Latvia. But as if his broken scale isn't torment enough at the end of his session he goes into the back garden and attempts (in strict violation of the Geneva Convention) his version of the theme from the Pink Panther. Yes, you heard me right. The only thing that has given me comfort in this trying time has been a story I remember reading two decades ago. Of course I was able to find it on the internet (may its name be blessed) and I laughed just as heartily as I did back in my old bedroom in Carrickfergus in 1988. It's called A Touching Story of George Washington's Boyhood by Mark Twain and its about Twain's compassion for the musically challenged, something that only came about after he had set fire to the homes of neighbours who fell in love with the trombone, drums, clarinet etc. Twain's, er, tune changed when he

finally fell a victim to the instrument they call the accordeon. At this day I hate that contrivance as fervently as any man can, but at the time I speak of I suddenly acquired a disgusting and idolatrous affection for it. I got one of powerful capacity, and learned to play "Auld Lang Syne" on it. It seems to me, now, that I must have been gifted with a sort of inspiration to be enabled, in the state of ignorance in which I then was, to select out of the whole range of musical composition the one solitary tune that sounds vilest and most distressing on the accordeon. I do not suppose there is another tune in the world with which I could have inflicted so much anguish upon my race as I did with that one during my short musical career.
...After he had been playing "Lang Syne" for a week or so he hit about the idea of improving the original melody with some "little flourishes and variations." He immediately gets kicked out of his rooming house and moves to another.
For three nights in succession I gave my new neighbors "Auld Lang Syne," plain and unadulterated, save by a few discords that rather improved the general effect than otherwise. But the very first time I tried the variations the boarders mutinied. I never did find any body that would stand those variations. I was very well satisfied with my efforts in that house, however, and I left it without any regrets; I drove one boarder as mad as a March hare, and another one tried to scalp his mother. I reflected, though, that if I could only have been allowed to give this latter just one more touch of the variations, he would have finished the old woman.
...I went to board at Mrs. Murphy's, an Italian lady of many excellent qualities. The very first time I struck up the variations, a haggard, care-worn, cadaverous old man walked into my room and stood beaming upon me a smile of ineffable happiness. Then he placed his hand upon my head, and looking devoutly aloft, he said with feeling unction, and in a voice trembling with emotion, "God bless you, young man! God bless you! for you have done that for me which is beyond all praise. For years I have suffered from an incurable disease, and knowing my doom was sealed and that I must die, I have striven with all my power to resign myself to my fate, but in vain — the love of life was too strong within me. But Heaven bless you, my benefactor! for since I heard you play that tune and those variations, I do not want to live any longer — I am entirely resigned — I am willing to die — in fact, I am anxious to die." And then the old man fell upon my neck and wept a flood of happy tears. I was surprised at these things; but I could not help feeling a little proud at what I had done, nor could I help giving the old gentleman a parting blast in the way of some peculiarly lacerating variations as he went out at the door. They doubled him up like a jack-knife, and the next time he left his bed of pain and suffering he was all right, in a metallic coffin.
For the rest of Twain's story click here. It might make the old misanthrope pleased to know that this night with this story, he saved two lives.
*this post originally appeared on Dec 08. I have since moved.
Posted by adrian mckinty at 10:01 AM