A Paragraph In A Notebook

6 years ago this week I wrote the first paragraph of what wd subsequently become book 1 of my Sean Duffy series. I wrote the paragraph in a notebook in longhand and forgot about it for about 6 months and when I found it again, I thought, I wonder what that's about and I began thinking. . .As Harold Bloom says we're all living under the anxiety of all our influences. Many influences jump out at me as I look at the paragraph. 'beauty of its own' is probably an echo of Yeats; the 2nd sentence is a deliberate homage to Gravity's Rainbow complete with the American word gasoline instead of petrol; the torpedoed prison ship is probably a reference to the sinking of Montevideo Maru; 'Knockagh Mountain' always struck me as amusing because Knockagh in Irish means 'mountain' so this is kind of a joke; the lovers/Afterlife line reminds me of a bit in Ursula LeGuin's Tombs of Atuin;  no one spoke, words...inadequate is something that Samuel Beckett said at the end of his life and of course its what Wittgenstein famously claimed; don't know where the 'God of curves' bit came from but I dig it....Anyway it all became paragraph 1 of book 1 and here it is, exactly as it appeared in my notebook:
*** 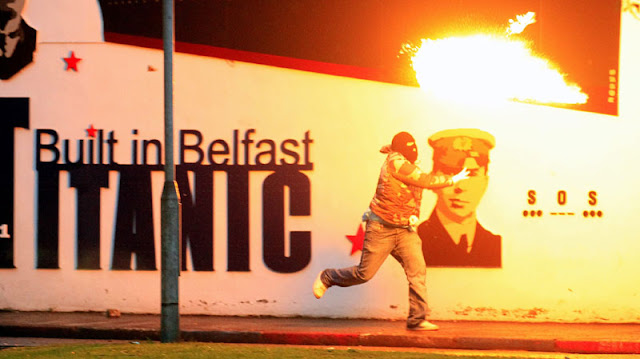 The riot had taken on a beauty of its own now. Arcs of gasoline fire under the crescent moon. Crimson tracer in mystical parabolas. Phosphorescence from the barrels of plastic bullet guns. A distant yelling like that of men below decks in a torpedoed prison ship. The scarlet whoosh of Molotovs intersecting with exacting surfaces. Helicopters everywhere: their spotlights finding one another like lovers in the Afterlife.
I watched with the others by the Land Rover on Knockagh Mountain. No one spoke. Words were inadequate. You needed a Picasso for this scene, not a poet.
The police and the rioters were arranged in two ragged fronts that ran across a dozen streets, the opposing sides illuminated by the flash of newsmen’s cameras and the burning, petrol-filled milk bottles sent tumbling across the no man’s land like votive offerings to the god of curves.