The Irish Times Reviews Police At The Station

Declan Burke in the Irish Times reviews Police at the Station thusly: 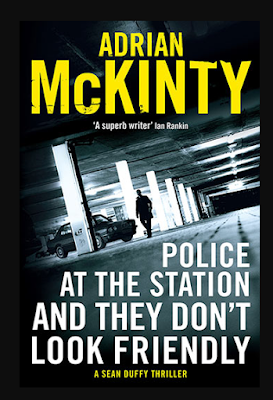 Police at the Station and They Don’t Look Friendly (Serpent’s Tail, €15.99) is the sixth in Adrian McKinty’s increasingly impressive series to feature Sean Duffy, a Catholic detective working for the RUC during the Troubles.
The mystery begins with a bizarre murder, when drug dealer Francis Deauville is shot to death with a crossbow. When Duffy starts to wonder why an “independent” drug dealer who has been paying protection to the paramilitaries has been assassinated in such an exotic fashion, he finds himself assailed on all sides. Persecuted by the RUC's internal affairs unit and fending off IRA attacks, Duffy digs deep into Northern Ireland’s recent past to uncover a tale of collusion, corruption and unsolved murder.
The plot is as tortuously twisting as McKinty’s readers have come to expect but it’s the tone that proves the novel’s most enjoyable aspect. McKinty delivers a first-person tale of cheerfully grim fatalism and often hilarious Prod-Taig banter, the story chock-a-block with cultural references, from NWA and Kylie Minogue to Miami Vice and The Myth of Sisyphus.
Posted by adrian mckinty at 4:33 PM